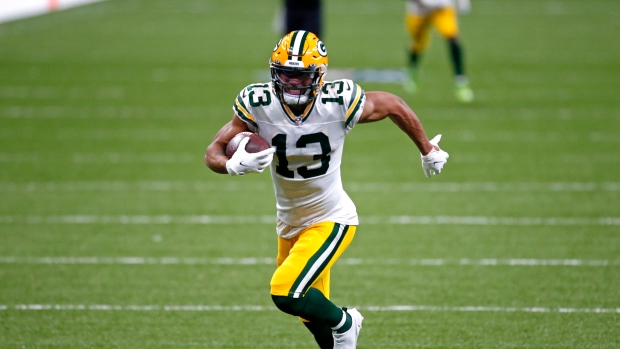 Week 3 in the NFL was nothing like Week 2 from an injury standpoint.

None of the stars on the slate were forced off the field early, and one of the biggest receiving performances came from a benefactor of the Week 2 carnage.

Note to self: Add Allen Lazard in fantasy.

With Davante Adams nursing a hamstring injury, Green Bay Packers wide receiver Allen Lazard racked up 146 yards and a touchdown versus the Saints.

Lazard headlines this week’s top picks in Scanning The Wire.

Adams was looking doubtful all week, meaning Lazard should have been owned in nearly every fantasy league.

However, going into Sunday night’s game he was rostered in just 39 per cent of TSN fantasy football leagues.

Adams’ status for next week is unknown, but Lazard should still be rostered even if he returns.

The concern over the Dolphins backfield entering this season was that there was going to be too many mouths to feed for one running back to be productive.

Well, after seeing Myles Gaskin dominate touches over the past few weeks, it’s safe to put those prior concerns to bed.

Myles Gaskin has played two-thirds of the snaps again today. He's the guy in Miami.

Gaskin played 78.9 per cent of Miami’s offensive snaps against the Jaguars, rushing for 66 yards and hauling in five passes from Ryan Fitzpatrick. He’s yet to find the end zone, however that will surely change if this volume continues.

Gaskin is available in 54.2 per cent of TSN fantasy football leagues.

Chris Carson reportedly escaped serious injury from this dirty hit by Dallas’ Trysten Hill, but it sounds like he’ll still miss a game or two.

This is one of the dirtiest plays I’ve seen in *any* sport in a long time.

*This* is how you end someone’s season.

I hope the league punishes (suspends) Trysten Hill swiftly. Thankfully Chris Carson walked off the field under his own power. #SEAvsDAL pic.twitter.com/Wnxj6uciJR

The 30-year-old rushed for over 1,000 yards and 6 TDs last season, and will be the next man up in the NFL’s second-highest-scoring offence.

He’s available in over 90 per cent of TSN fantasy football leagues.

49ers running backs are dropping like flies and Jeff Wilson Jr. is the guy who stands to benefit.

Jerick McKinnon left Sunday’s game against the Giants with a rib injury, meaning each of San Fran’s top three backs is hurt.

Wilson is far from an elite talent, but he does have a nose for the end zone. He hit paydirt again on Sunday, giving him five rushing touchdowns on his last 41 carries.

Raheem Mostert may return in Week 4, but get Wilson into your lineups if he doesn’t. He’s available in 85.6 per cent of TSN fantasy football leagues

With all due respect to Adam Thielen, the Vikings were going to need another receiver to step up if they have any hope of winning games this season.

Their 2020 first-round pick was quiet in Weeks 1 and 2, but exploded on Sunday versus the Titans.

Third-highest single-game grade by a rookie WR since 2006.pic.twitter.com/1EvY3xsG5v

Jefferson caught seven of his nine targets for 175 yards and a score. Minnesota looks like a team that will be playing from behind frequently, meaning Jefferson’s volume could be here to stay.

He’s available in 66.5 per cent of TSN fantasy football leagues.

Philadelphia is incredibly thin on offence.

First-round pick Jalen Reagor is on IR and Desean Jackson left Sunday’s game with a hamstring injury. To make matters worse, tight end Dallas Goedert is also out with an ankle issue.

The Eagles are desperate for playmakers and Alshon Jeffery could be ready to return.

The 30-year-old has missed the first three weeks with a foot injury, but could be back in the lineup as early as this week against San Francisco.

Should he return, he’ll fall into Philly’s No. 1 receiver role, making him fantasy viable.

I’d wait to get confirmation on his status before pulling the trigger, but if he’s active go ahead and grab him.

He’s available in 86.2 per cent of TSN fantasy football leagues.