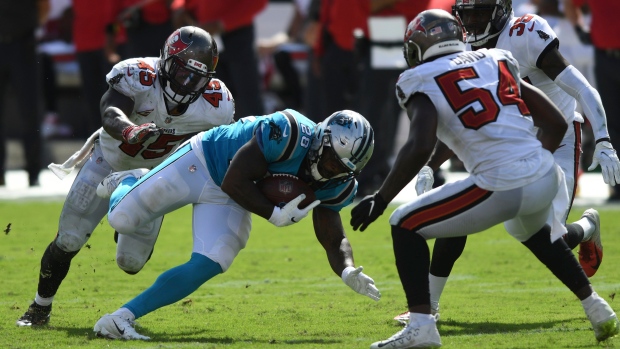 Congratulations if you managed to survive Week 2 of the fantasy football season without losing one of your star players to injury.

The second Sunday of the NFL season was especially brutal, as injuries tore through the league at an unprecedented rate, shelving several of the game’s biggest stars.

Six of the top-30 players in TSN fantasy football leagues by ADP were forced to the sideline, five of which are expected to miss significant time.

Carolina Panthers running back Christian McCaffrey, the consensus No. 1 fantasy pick, is out four-to-six weeks with a high-ankle sprain (the same injury that reigning receiving king Michael Thomas suffered).

Giants running back Saquon Barkley, who was a consensus top-three overall option, tore his ACL and is done for the season.

Saquon Barkley has a torn ACL.

Barkley had 20 games with 100+ scrimmage yards over his first 2 seasons.

That is tied for 4th-most in NFL history, per Elias, trailing Edgerrin James (27), Eric Dickerson (26) and Billy Sims (21). pic.twitter.com/oAB4qubkru

With so many stars now on the sidelines, nailing the waiver wire this week is extremely important to your fantasy success.

So without further delay, here are the top pick-up options that could still be available in your league heading into Week 3.

The absence of CMC creates an abundance of opportunity in the Panthers backfield. McCaffrey was averaging 24 touches a game and that work has to go somewhere.

Enter Mike Davis, one of only two healthy RBs on the team. Davis was a big part of the Carolina offence once McCaffrey left the game, and faces little competition for work.

Mike Davis ran 17 routes in relief of Christian McCaffrey (ankle) and was targeted on 8 of them. Caught all 8.

As of right now, the only one standing between him and 15-20 touches a week is special teamer Trenton Cannon, making Davis a must-add in all formats. He’s currently available in over 99 per cent of TSN fantasy football leagues.

Great to see the dynamic back we came to know at Memphis! pic.twitter.com/4bHFV8kBxS

That’s great news for Darrell Henderson Jr., who ripped off 81 yards and a score on the ground, and added another 40 yards through the air. The Rams lead the NFL in rushing rate (56.83%) and Henderson is available in 55.4 per cent of TSN fantasy football leagues.

Multiple reports out of the Big Apple suggest the Giants are interested in bringing in a free- agent running back, and Freeman is the best name available.

Even if he doesn’t land in New York, with so many injuries to his position he’s bound to sign somewhere. When he does, he’ll have real fantasy value, which makes him a great add this week. He’s currently available in 92. 1 per cent of TSN fantasy football leagues.

A.J. Brown is dealing with a knee injury, which makes Corey Davis an enticing add for wide receiver-needy teams. The former first round draft pick has yet to live up to his potential so far in his career, but is off to a nice start so far in 2020.

Davis has produced double-digit points in back-to-back outings and is tied for the team lead in targets (13). He’s currently available in 64.4 per cent of TSN fantasy football leagues.

Mecole Hardman, everyone’s favourite 2020 sleeper, is in line for an increased workload due to the head injury to Sammy Watkins. The 4.33 speedster should now see work in three receiver sets.

Although he won’t be Patrick Mahomes’ first look, he has the talent to single-handedly swing your fantasy matchup in the blink of an eye.

A jump pass touchdown and Mecole Hardman is just too fast for the #Titans pic.twitter.com/TlglWGgzA3

Hardman converted six of his 26 catches into touchdowns last season. He is currently available in 57.8 per cent of TSN fantasy football leagues.

Fresh off a two-touchdown performance in Sunday’s win over the Jaguars, Jonnu Smith is the biggest priority-add at the tight end position. He’s tied for the team lead in targets (13) and leads all Titans with three touchdowns.

So you started Jonnu Smith for Week 2 ... The Titans' first drive determined that was a good move.pic.twitter.com/azHnaDHRFJ

A freak athlete, Smith ranks 10th in the NFL in yards after catch (85) this season. He is still available in 59.7 per cent of TSN fantasy football leagues.