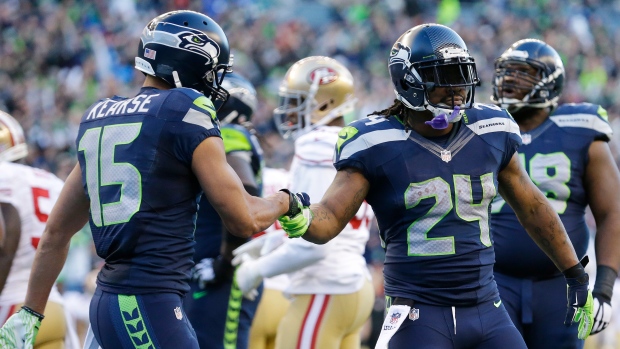 GREEN BAY, Wis. - The Seahawks' Marshawn Lynch and the Packers' Eddie Lacy are known for being punishing runners.

Their conduct in front of the cameras couldn't be any different.

Lynch isn't a talker, to put it mildly. The affable Lacy can charm reporters and teammates with an easygoing personality.

Trying to tackle Lynch and Lacy won't be easy for the defences when Green Bay visits Seattle on Sunday in the NFC title game.

Lacy will take that question.

"I mean personally, I don't know him, I never met him or anything," he said. "But we're both physical backs. We don't care who's in front of us. When you come to hit us, you've got to come ... you've got to try your hardest to get us down."

Sure-handed tackles become of utmost importance. Defenders will have to swarm to the ball to prevent the runner from bouncing off a tackle and rumbling for extra yards.

It is Lynch's specialty.

"He's a dog — his whole demeanour," Seattle safety Earl Thomas said. "He's a man amongst boys out there."

One who had his fourth straight season of at least 1,200 yards rushing. Lynch finished the regular season with 1,306 yards on 280 carries and 13 scores.

The Seahawks led the league in averaging 172.6 yards rushing per game, with mobile quarterback Russell Wilson also posing a threat on the ground.

"We're kind of just reaping the benefits of the philosophy but then how the players go out and execute it," Seahawks offensive co-ordinator Darrell Bevell said. "We got as good of guy you'd ever want to hand it to with handing it to Marshawn."

Packers linebacker Julius Peppers, a 13-year veteran, described Lynch as "one of the hardest runners I think in football in my opinion. Very physical and violent runner."

It sounds a lot like trying to tackle Lacy.

"Those guys are similar in the sense that you have to have multiple defenders trying to get those guys down," Peppers said.

Whereas Lynch and Wilson share top billing in the Seattle attack, Lacy and his production can get overshadowed by Aaron Rodgers. The quarterback is having an MVP-calibre year, even after being slowed by a strained left calf.

The injury makes Lacy an even more important piece to Green Bay's offence. As evidence, Lacy was added to the injury report as a precaution on Thursday as a limited participant because of a sore knee.

"I was just being conservative, so I pulled him in about the middle of practice," coach Mike McCarthy said on Thursday. "I think Eddie will be ready to go on Sunday. Just the coach was nervous, all right?"

The running game stalled in a 1-2 start, when Green Bay played Seattle, the New York Jets and Detroit to open the season — three of the top defences against the run in the league.

The Packers were also a bit more conservative early on in giving Lacy carries, while putting added emphasis on catching passes out of the backfield.

He has turned into Green Bay's third-leading receiver as a check-down threat for Rodgers, while the production on the ground has steadily increased behind an effective offensive line.

Lacy finished with 1,139 yards on 246 carries with nine touchdowns. Counting last week's playoff win against Detroit, Lacy is averaging 99 yards in his past seven games.

"His ability to be a three-down player is of primary importance to us," McCarthy said. "He's breaking tackles, but we're going against an excellent tackling defence, so this will be a big challenge."

The Seahawks figured out Lacy in the 36-16 win over Green Bay in the league opener in Seattle. Lacy was held to 12 carries for 34 yards before leaving the game with a concussion following a hit from safety Kam Chancellor.

At least that's how it was reported in injury report.

"Uh I remember it wasn't a concussion. It was 'got rung my bell,'" Lacy said with a laugh to a gaggle of reporters. "So I ran into Kam! That's what happened."

Notes: Rodgers was limited in practice for a second straight day. "Went through pass under pressure and went through two team periods. So getting ready to play," McCarthy said. ... The Packers are travelling to Seattle on Friday. McCarthy said he's still looking for an indoor facility in the Seattle area for practice on Saturday, but "it'll be as close as we can get it to our normal Saturday practice."