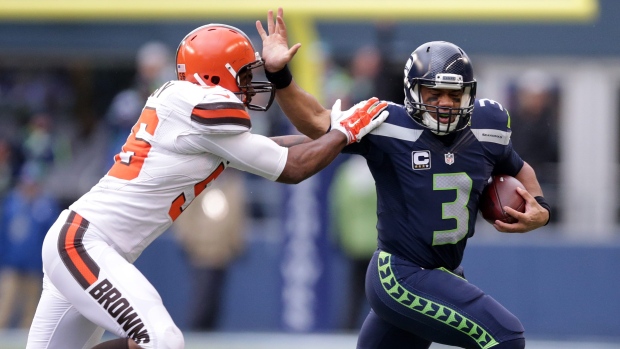 SEATTLE - Not until Pete Carroll pulled everyone together after a fifth straight victory did the Seattle Seahawks find out they were bound for the post-season.

And the reaction was as expected. No overwhelming celebration. No special significant, even if Seattle bucked history by overcoming a miserable start to the season and reached the playoffs for the fourth straight year.

"We're resilient," Seattle's Doug Baldwin said. "You can count us out. You can say what you want to about all of our players, but we're going to be consistently efficient at what we do."

Once again led by the duo of Baldwin and Russell Wilson, the Seahawks rolled past the Cleveland Browns 30-13 on Sunday to wrap up a berth in the NFC playoffs as the Seattle offence continues to be difficult to slow down, let alone stop.

Wilson put together another elite performance in a week where Cleveland coach Mike Pettine stirred debate by saying Wilson wasn't in the top tier of NFL quarterbacks. Wilson completed 21 of 30 passes for 249 yards and found Baldwin for two of his three touchdown passes.

When Sunday ended, Baldwin's name was sitting next to Jerry Rice's as the only wide receivers in NFL history with 10 TDs over a four-game span in a single season. Rice had 10 TD catches from a combo of Joe Montana and Steve Young during the 1987 season. Baldwin has grabbed all 10 from Wilson, and he became the third wide receiver since 1960 with four straight games with multiple TD catches, joining Calvin Johnson in 2011 and Cris Carter in 1995.

And Wilson? He's the only quarterback with five straight games with three or more TD passes and zero interceptions, although he was nearly picked off at the goal line by Tramon Williams in the closing minutes.

They are marks with huge historical significance that were both downplayed by the involved participants.

But not their teammates.

"He's a top-tier player in this league," Richard Sherman said of Baldwin. "He can get open. There's not many things out of his realm, his ballpark. There's not much he can't do."

Unlike the previous three playoff trips when Seattle's success was largely based on the dominance of its defence, this trip to the post-season is on the shoulders of an offence lately can't be stopped.

Tyler Lockett added a 27-yard touchdown catch on the first play of the fourth quarter to give Seattle a 27-10 lead and while Baldwin was setting records, Jermaine Kearse had the best regular-season game of his career with seven catches for 110 yards. Seattle has scored 30 or more in five of its last six games.

Coming off arguably the best game of his young career, Cleveland quarterback Johnny Manziel didn't make any critical mistakes but only got the Browns into the end zone once. Manziel was 19 of 32 for 161 yards and was intercepted by Marcus Burley with 2:06 remaining trying to force a throw downfield.

Manziel mostly silenced the 12th Man on Cleveland's first drive, leading the Browns on a 15-play march capped by a 7-yard TD to Gary Barnidge on a 7-yard TD strike. It was the first touchdown drive allowed by the Seahawks defence since the fourth quarter of their win over Pittsburgh, a span of 21 possessions.

Cleveland had 80 yards on its first possession, but just 150 the remainder of the game.

"The margin of error against a team like the Seahawks is slim and, at the end of the day, we weren't good enough," Pettine said.

Seattle started with a committee trying to replace the absences of Marshawn Lynch and Thomas Rawls at running back. Derrick Coleman got the first carry, Bryce Brown got a handful of looks, but it was Christine Michael who shined. The former second-round pick by the Seahawks who was traded away to Dallas at the end of training camp and re-signed this week, finished with 84 yards rushing.

But it was the arm of Wilson that made the difference, hitting Baldwin on a pair of TD throws on consecutive drives in the first half to take a 14-7 lead and extended the lead to 20-10 at halftime when a defensive penalty on the final play allowed Steven Hauschka to hit the second of his three field goals.

"The efficiency of the offence is the best it's been since we've been here," Carroll said.

NOTES: Seattle LT Russell Okung left with a strained calf muscle in the fourth quarter. ... Cleveland G John Greco was hurt on the second play of the game and did not return. ... Seattle RB Fred Jackson is headed to the playoffs at age 34 for the first time in his career.