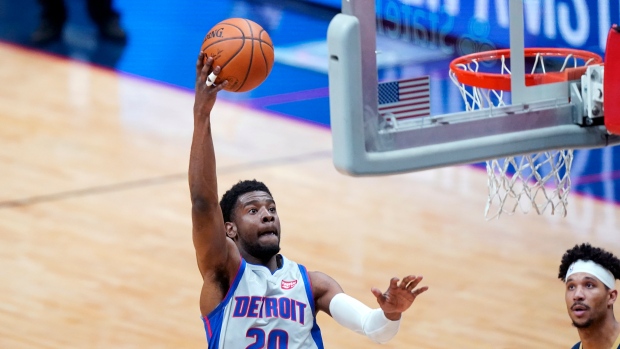 By this stage of the NBA season, your team’s stat profile is unlikely to change.

If you’re consistently losing steals and blocks, try to trade away your defensive anchors for scoring specialists. If your team is full of chuckers, give up on percentages and snag players like Kemba Walker or Buddy Hield.

Being category specific is the name of the game from this point on. Here are five names that can help you heading into the weekend:

With Blake Griffin already on the sidelines, Delon Wright went down last Friday leaving the Detroit Pistons short on playmakers. In the three games since, Jackson has come off the bench and provided an assertive scoring spark for Dwane Casey’s guys. On the season he was averaging 10.7 FGA per game. Over the last three games? He’s averaging 19.3 FGA leading to 20 PPG. His shooting stroke has room for improvement but he’s been consistently getting to the rim during these three games. Check his shot chart below. 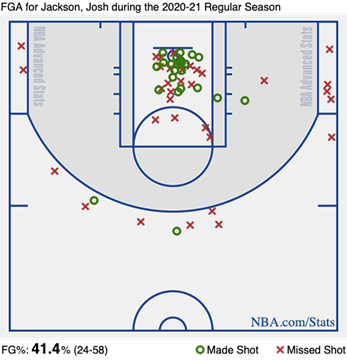 If you need points and threes, I’d roll the dice on Jackson. If you specifically need threes, how do you not ride with Robinson? He’s been 82nd on ESPN’s player rater over the last two weeks and is 10th on the season in three-pointers per game (3.3). The Miami Heat offence is built around ball movement and spacing which leads to high volume for Robinson. He’s attempted 10 or more three-pointers in over half of his games these past two weeks. ‘Shooters gonna shoot.’

While Thompson’s role has diminished since joining the Boston Celtics, he’s still effective at what he does best. He’s 21st in the NBA at 8.4 RPG playing just 23 MPG. Sure, his defensive production and scoring are down, but if you’re in need of rebounds, he’s the most reliable option with two games this weekend. Indiana and Washington both rank in the bottom third of opponent rebounds per game. Thompson is also coming off consecutive double-digit rebounding performances this week.

I’m baffled McConnell is still available in almost 60 per cent of ESPN leagues. In the long term, I get it; Warren and LeVert should return at some point, pushing him further down the depth chart. But for the time being, the numbers are the numbers. Over the last two weeks, he’s averaged 32.4 MPG, 6.8 APG, 2.6 SPG, and shockingly getting 1.4 BPG for the Indiana Pacers. He’s 65th in ESPN’s player rater over the last two weeks and is one of the best non-scoring fantasy assets you can currently stream.

Last week I recommended Noel with just one weekend game and he reliably dropped two blocks. With a back-to-back coming up this week, Noel is once again the high-floor option if you’re trying to win blocks. Haters will point out that he’s averaged the same number of blocks (2.0) in 17.5 MPG off the bench versus 28.3 MPG as a starter, but who cares? So long as he’s getting the minutes, the blocks will come. In his last 10 games for the New York Knicks, he’s only had one where he didn’t register a block.