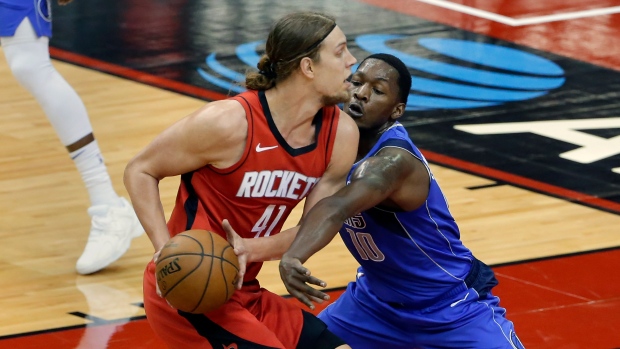 With the fantasy playoffs lurking in standard leagues, every category win counts as you fight for a berth or a bye.

Every player below has two games over the weekend. Kelly Olynyk, Cole Anthony and Malachi Flynn double as category-based streamers, but are also all-around adds with top-100 upside.

May the fantasy gods be in your favour this weekend.

If Olynyk’s rostership is going to float below 50 per cent, I’m going to use this column to feature him. In seven games since being traded to Houston, he’s averaged 17.4 PPG. Whether he’s starting (18.0) or coming off the bench (16.6), his scoring numbers have been comparable. Outside of last night, he hasn’t shot worse than 50 per cent for the Rockets and is dialled in on the free-throw line (21-of-22). Christian Wood has played in his last five games, Olynyk still filled up the stat sheet, so don’t let his presence deter you from rostering the Canadian.

Bertans returned to the lineup three games ago and has gone immediately into heat-check mode. In just 21.4 MPG, he’s dropped 14 three-pointers and is making an impact even with Rui Hachimura returning last night. Never afraid to fire a contested three, the 61st-ranked fantasy player in 2019-20 could be a cheap source of threes.

The Brampton, Ont., native returned to the lineup after missing over three weeks due to health and safety protocols. While he won’t rank as a top-200 fantasy player this season, if you’re looking for boards, Thompson has proven he can get the job done. He’s averaging 8.4 RPG this season and with Daniel Theis out of town, he’s only fighting with Robert Williams for centre minutes. Even though ‘Time Lord’ has been starting, he’s only cleared 30 minutes once in 44 games this season.

Last week I recommended Tomas Satoransky who proceeded to drop 15 assists over the weekend. He’s still a viable play this week, but I wanted to spotlight Orlando rookie Cole Anthony who returned from a two-month absence last night. The 15th pick in the 2020 draft was heating up at the beginning of February before succumbing to a shoulder injury. Now that he’s back, I’m willing to bet the front office prioritizes his development and continues favouring the future pieces on their current roster. Anthony dropped seven assists in his first game back and could provide that level of production from here on out.

Fans in Toronto have been calling for more Malachi minutes. Well, their wishes have come true. Over the past three games, Flynn has averaged 32.6 minutes off the bench and racked up eight steals. Kyle Lowry continues to sit with a right toe infection and Fred VanVleet has been out since the landslide victory versus Golden State with a strained left hip flexor. The Raptors have a key matchup tonight against the Bulls as they compete for the final play-in tournament spot. See if either vet is announced to play. If they continue to sit, Flynn might get 30 or more minutes over the next three games.

Noel’s roster percentage has dropped eight points since last week, but he continues to be a top asset for blocks. He’s not giving you much in field-goal percentage, rebounds or scoring but as a defensive specialist, there are few free agents more consistent than him. He has registered at least one block in 21 of his last 22 games.