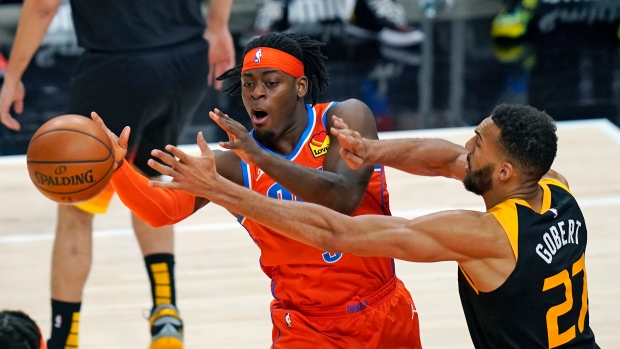 Adapt and react is the name of the game.

That’s been the story of Week 16 so far.

With so many DNPs popping up, opportunities are surfacing all around the league. Here are my 10-team and 14-team streaming options for the weekend.

I’m not here to tell you an NBA scoring leader has appeared on the waiver wire. No, Dort’s 42-point outburst isn’t sustainable. Yes, he should still be considered a high-risk, high-reward streamer. As a 33 per cent three-point shooter, he’s unlikely to go 7-for-11 from deep again, but the 31 shot attempts should catch your eye. Any player who has the green light to take that many shots has the upside to swing the point category. With the Thunder’s roster thin as it is, the undrafted sophomore is unexpectedly an alpha dog in this offence.

I continue to be baffled at seeing White’s rostered percentage sit under 50 per cent, but if you can grab him, he’s a premium 10-team addition. He just dropped six threes on the Raptors last night and has averaged 2.6 threes in April. While he’s not the deadliest three-point threat (33.3 per cent in the past two weeks), he’s attempted 63 triples this month – eighth most in the NBA. Even if he has an off shooting night, you’re still going to get some additional value in points, free-throw percentage and defensive stats.

I take accountability for crowning Brown as the post-deadline grab of the season. Since his monster 21-point, 23-rebound performance on March 27, he’s ranked outside the top 150 in fantasy. While he’s not the most helpful roto player, if you specifically need rebounding, defensive stats and field-goal percentage, Brown can still help. He’s coming off consecutive double-double performances and has averaged 10.0 rebounds in April. Two weekend matchups against exploitable frontcourts should also help his case.

The Bulls are in the midst of another losing streak and if things keep tumbling, I wouldn’t be shocked to see another shakeup to the rotation. For now, Satoransky remains in the starting five and will continue being a reliable source of assists. While he’s capable of tossing up some stinkers like his two-point, two-assist performance against the Grizzlies, he’s averaged 6.1 assists over the past two weeks (25th in the NBA). There’s not a lot of peripheral upside with Sato, so grab him only if you need an efficient streamer for assists.

I wrote about Brown earlier this week, spotlighting him as a good injury replacement streamer. Even though Kyrie Irving returned on Wednesday, Brown still got 31 minutes off the bench and gave his managers a solid all-around fantasy line. He’s averaged 1.7 steals and 1.0 blocks over the past two weeks and established a consistent role in Brooklyn’s lineup as their defensive glue guy. Don’t be deterred if he comes off the bench from here on out, he’s getting enough minutes to make a dent in the defensive categories.