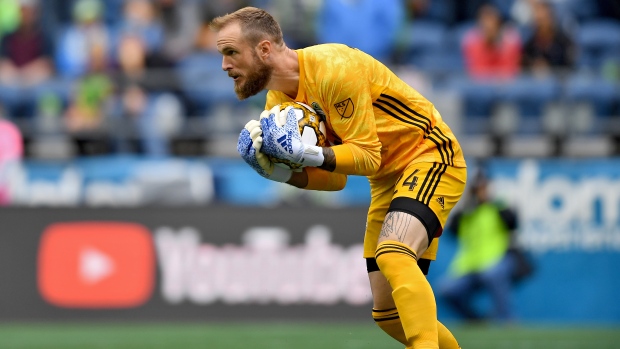 Seattle coach Brian Schmetzer said it was two points lost for the Sounders. His coaching counterpart, Luchi Gonzalez, saw it as one big point gained for FC Dallas.

Stefan Frei made three saves for his first shutout since July as both Seattle and Dallas picked up a crucial point in the standings by battling to a scoreless tie on Wednesday night.

The Sounders (14-9-8) reached 50 points and retained their tenuous hold on second place in the MLS Western Conference. They're now two points ahead of third-place Minnesota and four in front of Real Salt Lake.

"It's always two points dropped when you draw with a team at home," Schmetzer said in a sombre tone. "We weren't sharp in the first half and it took us awhile to get going. The second half, I thought we played better. We had some good half-chances, a couple crosses that went astray or not to the right guy — it always just seemed like something was a little off.

Dallas (12-11-8) now has 44 points, and combined with Portland's 2-0 home loss to the New York Red Bulls, jumped ahead of the Timbers in the West. Dallas and San Jose are tied for sixth with 44 points. Portland dropped into eighth.

"A good point. A positive point. I thought the boys showed a good reaction to the last game (a 4-0 blowout loss at Chicago last Saturday) to come to a difficult place to earn points," said Gonzalez, whose team has three games left to secure a post-season berth, while Portland and San Jose each have four.

"We prevailed defensively and kept zero in our net, so that's really positive," Gonzalez added. "Offensively, I think we got near the box with some open space to create some quick attacks, and we didn't get one. So we want to keep improving no matter where we play."

The last shutout for Frei and the Sounders was 1-0 at Houston on July 27. In the eight games since and before Wednesday's game, Seattle had allowed 19 goals in going 3-3-2.

It was Frei's eighth shutout of the season.

"It has been a while, so that's the one positive we can take from today, the fact that we were able to limit their chances," Frei said. "I think we were a little tired today (after Sunday's 4-2 win over the New York Red Bulls), and maybe that inadvertently kind of helped us defensively. I think today our positioning as a unit was a little better and there were less holes, and we were able to plug them when we did have holes."

Jesse Gonzalez earned his seventh shutout for Dallas. He made three saves.

Cristian Roldan had Seattle's best scoring chance. In the 55th minute, Joevin Jones sent a cross from the left wing to the top of the 6-yard box. Roldan ran onto it, but launched his shot over the top.

"The second half, we were much better and we did create come good chances. It's a shame we couldn't get one," Schmetzer said.

Roldan also was well positioned for a shot in the 38th minute, but as he tried for a header at the top of the 6-yard box, the cross from Joevin Jones flew just inches beyond his reach.

The most dangerous try for Dallas came in the 38th minute when Dominique Badji sent a rising shot goalward from the top right corner of the penalty area. Frei made a leaping save.

The Sounders played the final four minutes of regulation and all nine minutes of stoppage time with 10 men after Xavier Arreaga was sent off with his second yellow card.