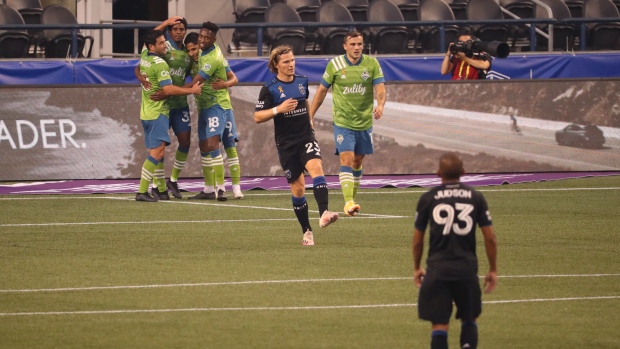 SEATTLE — Raul Ruidiaz and Joevin Jones both scored twice and the Seattle Sounders set a franchise record for goals in a match with a 7-1 victory over the San Jose Earthquakes on Thursday night.

Seattle scored five goals faster than any team in MLS history, needing just 33 minutes to take a 5-0 lead on the hapless Earthquakes. The five goals in a half set a franchise record and Seattle tied the league record for most goals in a first half, joining Chicago in 2019 against Atlanta United and FC Dallas in 2017 against Real Salt Lake.

The Sounders added two more in the second half, becoming the ninth team in league history to score at least seven goals in a match. The league record for goals in a match is eight, set by the LA Galaxy in 1998 against Dallas.

The six-goal margin of victory was the worst loss for San Jose (2-4-3) in its MLS history. Chris Wondolowski added to his all-time MLS record for goals scoring his 163rd on a penalty kick in the 71st minute for the only San Jose highlight.

Seattle (5-2-3) rebounded from last Sunday's loss to rival Portland and moved to the top of the Western Conference standings, one point ahead of Sporting Kansas City and Minnesota United.

Kelvin Leerdam scored for the second straight match in the 15th minute with a right-footed shot from the top of the penalty area, and Jones scored his first in the 20th minute off an assist from Ruidiaz.

And it could have been worse. San Jose goalkeeper Daniel Vega twice stopped Morris in close late in the first half, otherwise a sixth or seventh goal may have come.

João Paulo scored his first MLS goal early in the second half off assists from Leerdam and Morris, and Jones added his second in the 60th minute off another assist from Morris. Morris finished with three assists.

Vega added a couple more saves later in the second half to keep Seattle from scoring an eighth.