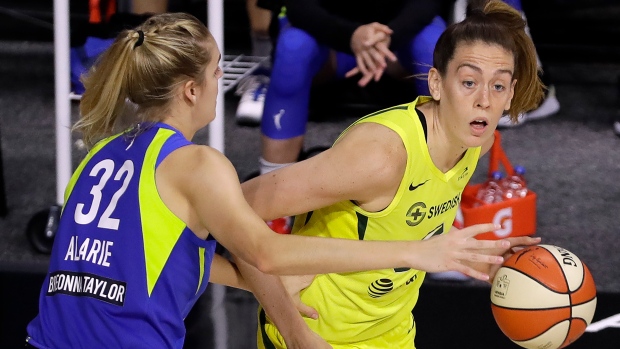 As we reach the halfway point of the WNBA season, it’s time to look at the standout performances from inside the league’s bubble at IMG Academy.

A number of players are making legitimate cases to be in the most valuable player conversation, but there are five in particular who have been the go-to catalysts for their teams.

With reigning MVP Elena Delle Donne of the Washington Mystics opting out of the season for medical reasons, the WNBA will see a new MVP crowned in 2020.

Leading the MVP race at midseason is the Seattle Storm’s Breanna Stewart. After missing 2019 with an Achilles injury, Stewart has come back stronger than ever to lead the Storm back to the top of the standings at 11-1. Averaging 18.5 points, 7.3 rebounds and 3.3 assists per game, Stewart has been the offensive catalyst on a deep Storm squad.

But the 2018 WNBA MVP isn’t just all offence. She ranks first in defensive win shares at 1.3 and total win shares at 2.7. She is top five in blocks at 1.4 per game and top 10 in defensive rebounding at 6.6 per game. Stewart is getting it done at both ends of the floor and that’s why she is the midseason favourite for to win her second MVP trophy.

Wilson has been a standout for the Las Vegas Aces so far this season, who have the second-best record in the league at 8-3, tied with the Los Angeles Sparks and Minnesota Lynx. The 24-year-old is averaging 19.5 PPG (second-best in the league), 8.5 RPG (fifth) and 1.8 APG.

Defensively, she is tied for second in defensive win shares at 1.0 and second in defensive rebounds per game at 7.5.  Wilson also ranks third in blocks at 1.6 per game. The 2018 rookie of the year has taken a step forward this year and continues to evolve into an even more dominant all-around player.

The only player ahead of the aforementioned Wilson in points per game this season is Ogunbowale.

Playing at a 21.4 PPG pace to lead the league, Ogunbowale has been dominant all season long, recording more than 15 points in every game this season. She is first in the league in field goals made (8.3 per game) and attempts (19.5 per game). Playing on a very young Dallas Wings team that is struggling in the standings at 4-8, Ogunbowale has been carrying the load all season long.

Defensively, Ogunbowale doesn’t have the same numbers as Stewart or Wilson but her dominant offensive performance can’t be ignored. If the Wings can pick it up in the second half, Ogunbowale will see more MVP consideration.

One of the reasons the Sparks sit tied for second in league standings is due to the play of Parker.

Offensively, Parker has been no slouch, averaging 13 PPG to go along with 3.7 APG. The Sparks are off to a good start in 2020 at 8-3, good enough for second alongside the Aces and Lynx. Parker’s defensive performance so far this season will continue to have her as a MVP contender.

A bit of a dark horse in the MVP race, the Sky lean heavily on their 31-year-old point guard and for good reason.

She leads the entire league in assists and it’s not even close. No one has dished the ball better than Vandersloot this season, as she’s averaging 8.6 APG, three full points higher than second-place Diana Taurasi at 5.6. She has completed 103 assists so far with the next closest being the Storm’s Jordin Canada with 63.

The Sky guard is first in offensive win shares at 1.6, and third in total win shares at 2.1. Vandersloot is averaging 12.2 PPG but is shooting 49.1 per cent from the floor and 40.5 per cent from three. She made history recently on Tuesday, becoming the first WNBA player to record 15 points, 15 assists and at least five rebounds in a game as the Sky ended the Aces’ seven-game winning streak with an 84-82 victory.