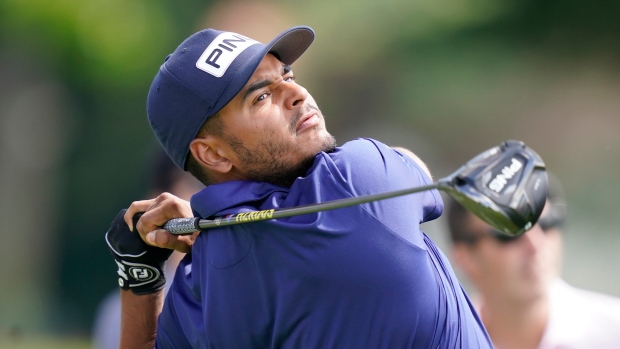 ST. SIMONS ISLAND, Ga. — Sebastian Munoz saw the tough weather conditions on the way to the RSM Classic and figured all he could do was keep his head down and make birdies. He wound up with a 10-under 60 to shatter his career round by six shots.

Scoring was so low Thursday at Sea Island that all that got Munoz was a one-shot lead. The Colombian, who won his first PGA Tour event just over a year ago, birdied his final hole at Seaside.

He led by one stroke over a group of four golfers tied for second, including past champion Mackenzie Hughes of Dundas, Ont.

Americans Zach Johnson, Chez Reavie and Scott Stallings are also in that group.

Adam Hadwin of Abbotsford, B.C., and Michael Gligic of Burlington, Ont., were five shots off the lead and in a group tied for 34th. David Hearn of Brantford, Ont., and are Taylor Pendrith of Richmond Hill, Ont., are six shots back, while Roger Sloan of Merritt, B.C., is seven. Adam Svensson of Surrey, B.C., struggled to a 71 on the day and is nine shots behind the leader.

Scoring was so ideal that 33 players shot 66 or lower on the two courses, located just off the Atlantic Ocean, and all but 21 players in the field of 156 broke par. The cumulative score in relation to par at the Seaside Course was 288 under, 42 shots lower than the previous record set in 2018.

The scoring average of 66.308 at the Seaside was a tournament record, and the second-lowest for any round on the PGA Tour since 1983, when the Tour began tracking hole-by-hole data. The record is 66.28 at Indian Wells in the 2003 Bob Hope Chrysler Classic.

A warm, sunny day that began with just enough light rain to often the already pure greens is expected to morph into more common November weather on the Georgia coast Friday with a drop in temperature and wind forecast to gust as high as 50 km/h.

“It was a perfect day and we all knew it (low scores) was out there,” added Cameron Smith, who had a 66 at the Seaside.

Munoz, however, was staying in the present for his best round as a professional. He hit 11 fairways and 16 greens, made six birdies on the front nine and punctuated the day with a 12-foot eagle putt at No. 15 and a 10-foot birdie putt at No. 18.

“I felt great yesterday playing the pro-am, basically the same weather for two days, so I knew I was hitting it good,” he said. “I just let it happen.”

“I haven’t really looked at the forecast,” he said. “I don’t know how much it’s going to blow tomorrow or if it’s going to be cold or not, so I’m just kind of here right now and I’ll adjust tomorrow and see what happens.”

Johnson was the only player who had a reasonable shot at sub-60 round. He was 9 under through 15 holes after making a 7-footer for birdie at No. 15 and missed birdie attempts of 10, 20 and 25 feet on the final three holes.

Johnson also had a shot at 59 in the Tour Championship in 2007 until hitting into a bunker on the par-3 18th hole at East Lake and having to settle for par and a 60.