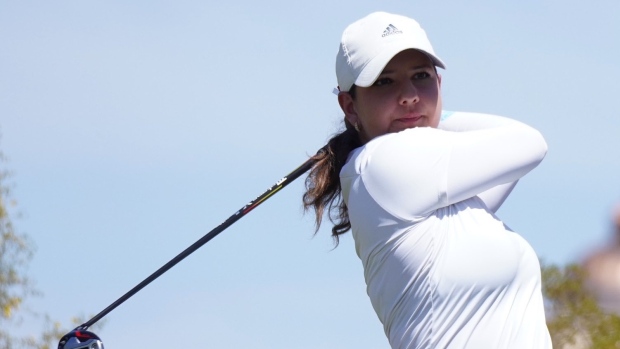 Selena Costabile was making plans to play in the Carlisle Arizona Women's Golf Classic when she got a message from a familiar name: Alena Sharp.

The two Canadians had met at the LPGA Tour's Q Series last winter. When Sharp saw that Costabile would be playing in the Epson Tour event in Mesa, Ariz., she decided to reach out to the younger golfer. Sharp, who lives with her wife Sarah Bowman in Arizona, suggested Costabile could stay with them for the duration of the tournament.

"I'm so grateful that I have that kind of friendship and I'm able to ask her questions, bounce ideas off of her," said the 23-year-old Costabile on Wednesday. "Her and Sarah both are amazing people and it's no surprise why she's been able to be so successful."

Sharp, who has been a fixture on the LPGA Tour since 2005, said that Canadians on the men's and women's circuits tend to stick together. She wanted to help Costabile and continue to foster that sense of community among Canada's golfers.

"I think it's important because Tour life can be pretty lonely," said the 41-year-old Sharp, who is from Hamilton. "I definitely think that Canadians are a closer knit group than players from other countries. I don't know if it's just because of Golf Canada with the team aspect but I really think it's a cool thing.

"I mean, yeah, we're competitive, but we want to see each other do well and it's not so cutthroat."

Costabile, from Thornhill, Ont., is in her second full year on the Epson Tour. She said that between the two seasons she did a self-evaluation of her game and recognized she needed to work on her mental performance and how to manage her time around events.

"Golf can beat you up in so many different ways but as long as you have the drive and the passion for it and the will to just keep going and pick yourself up and keep trying, I think the sky's the limit," said Costabile. "You can you can do anything you set your mind to and that's really been clear from what I've seen through Alena."

Costabile's off-season self-evaluation has seemingly paid off this year.

In 2021, she played in 15 Epson Tour events and made four cuts, but this season she's made the cut in all three events she's played in.

"I think just the mindset of being a little bit more prepared once the tournament comes was huge for me," said Costabile. "During the winter I placed more importance on being more calm out there and having a little bit more of a steady mind, It's been paying off so far."

LPGA TOUR — Brooke Henderson of Smiths Falls, Ont., is 10th in the Rolex rankings and third in the Race to the CME Globe standings after tying for 13th at the Chevron Championship on Sunday. She's back in action this week at the Lotte Championship at Hoakalei Country Club in Ewa Beach, Oahu, Hawaii. Maude-Aimee Leblanc of Sherbrooke, Que., and Maddie Szeryk of London, Ont., also teed off at the event on Wednesday.

PGA TOUR — Corey Conners of Listowel, Ont., and Mackenzie Hughes of Dundas, Ont., will be in the same group on Thursday and Friday at the RBC Heritage. They both made the cut at the Masters last week, with Conners finishing tied for sixth and Hughes tied for 50th. Roger Sloan of Merritt, B.C., Michael Gligic of Burlington, Ont., Adam Svensson of Surrey, B.C., as well as Nick Taylor and Adam Hadwin of Abbotsford, B.C., are also in the field this week at Harbour Town Golf Links in Hilton Head, S.C.

PGA TOUR OF CANADA — PGA Tour Canada, formerly known as the Mackenzie Tour, will unveil a new sponsorship deal on Thursday. The third-tier men's golf circuit will announce its 2022 schedule next week.

This report by The Canadian Press was first published April 13, 2022.