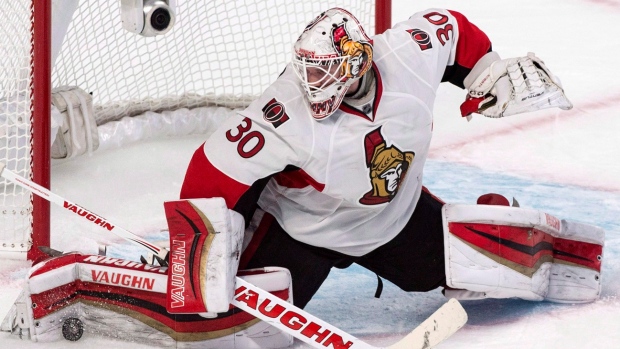 Ottawa Senators goaltender Andrew Hammond will miss the start of the NHL season due to a groin injury.

Hammond is out two weeks due to the 'tweak' sustained in practice earlier this week.

The Senators signed the goaltender to a three-year, $4.05 million contract during the offseason.

Hammond went on a spectacular late-season run during the 2014-15 season to lead the Senators into the playoffs.

Hammond made his first NHL start at the age of 27 in February, then went 20-1-2 with a 1.79 goals-against average and .941 save percentage to lead the Senators on an improbable run to the playoffs.

The Surrey, B.C., native went 0-2 with a 3.44 GAA and .914 save percentage in the first round against the Montreal Canadiens before being replaced by Craig Anderson.

Anderson will open the season as Ottawa's starting goaltender.