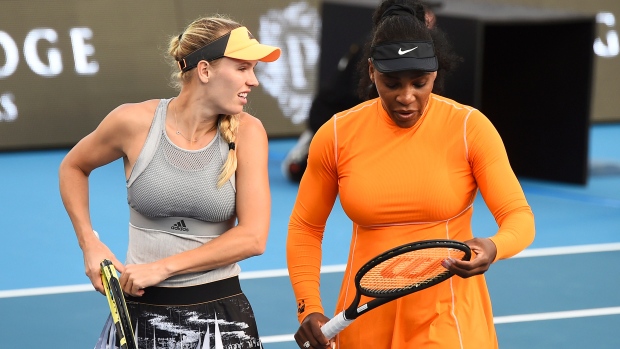 AUCKLAND, New Zealand — Serena Williams and Caroline Wozniacki prolonged their one-time-only doubles partnership Wednesday when they advanced to the semifinals of the ASB Classic.

Playing together for the first time in their careers, Williams and Wozniacki beat top-seeded Johanna Larsson and Caroline Dolehide 6-2, 6-1.

The pair will not play together at the Australian Open, which will be Wozniacki's final Grand Slam tournament before retirement. So the Auckland tournament offers the only chance for fans to savour the sight of two former No. 1 players playing as a partnership.

The match against Larsson and Dolehide, both accomplished doubles players, was the toughest test of their partnership. Larsson has 13 doubles titles and Dolehide has been a U.S. Open doubles semifinalist.

Williams was a driving force in their win Wednesday, dominating the court, though she paid tribute to Wozniacki who "never missed."

"We're just having a great time," Wozniacki said. "Even if I miss a couple and I'm mad at myself, Serena is always so positive. She's like, 'You're doing great. You're doing amazing,' so it makes you feel good out there.

“We're just going to go out there every match, just play, have fun and see what happens and the good thing is with doubles is we've had two matches and we're in the semifinals.”

Wozniacki will play Lauren Davis in the second round of singles on Thursday while Williams will play Christina McHale.

Eugenie Bouchard came into the tournament as a wild-card entry after a difficult 2019 season and progressed to the quarterfinals with a 6-4, 6-4 win over eighth-seeded Caroline Garcia.

The 25-year-old Bouchard, who has been as high as No. 5 in singles, dropped out of the top 200 last year, at one stage losing 12 straight first-round matches.

She incurred a time violation at set point in the first set but held serve, then closed out the match at her first opportunity.

“It just happened to be the best time to do my first aces of the match and three in a row, come on!” Carnet said. "I don't even know how that happened."