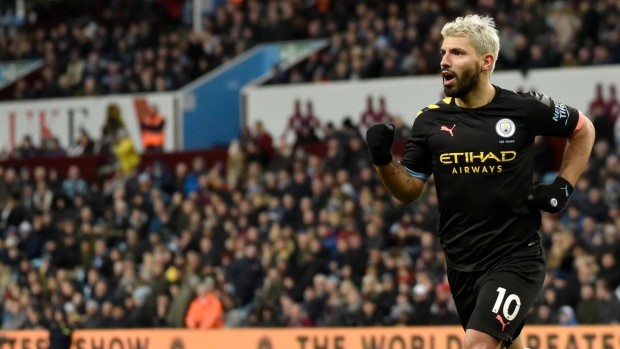 LONDON — Sergio Aguero scored a hat trick, set two records and lifted Manchester City back to second in the English Premier League on Sunday with a 6-1 rout at Aston Villa.

City's Argentine striker is now the highest-scoring foreign player in EPL history with 177 goals from 255 games, overtaking Thierry Henry's mark of 175. It was also Aguero's 12th hat trick in the EPL, breaking a tie with Alan Shearer.

“He (Aguero) is a legend and the legend rose tonight,” City manager Pep Guardiola said.

“I think that Henry is one of the most incredible players I have seen in this league and I think that he will be proud that Sergio is the guy that broke his record. He was a legend and with Sergio it's the same.”

Aguero also played his part for the team Sunday, assisting Riyad Mahrez's opening goal against Villa, which slipped into the relegation zone.

“I want to keep scoring more goals, but it all depends on my teammates. If they pass to me, then it's fine," Aguero said.

Aguero still has some way to go to reach the overall Premier League goals record of 260, set by Shearer.

The title appears out of reach, with a 14-point gap to Liverpool, but City is best of the rest again.

Second-place City is two points ahead of Leicester, which lost 2-1 to Southampton on Saturday.

The game was goalless until the 18th minute before City scored three in the next 10 minutes to seize control. First came two goals from Mahrez, who last scored a brace in September 2018. Then there was Aguero's goal to tie Henry's record - a powerful, curling right-footed shot from outside the area.

Kevin De Bruyne swung in a perfectly timed cross from deep to leave Gabriel Jesus an easy finish in first-half stoppage time. Aguero made it 5-0 in the 57th minute, strolling through Villa's defence before hitting the ball past Orjan Nyland in goal. He completed his hat trick in the 81st.

It was the seventh time this season in all competitions that City has scored at least four goals in a game, and the club's biggest EPL win since thrashing Watford 8-0 in September. It's now five straight wins in all competitions since City's surprise 3-2 loss to Wolverhampton on Dec. 27.

Villa's only goal came from Anwar El-Ghazi's penalty in stoppage time, when his team was already six goals down.

Villa drops to 18th in the table after Watford's win over Bournemouth earlier Sunday.

It was a miserable return to action for Danny Drinkwater in his first game for Villa on loan from Chelsea.

Unusually, all of his last three Premier League appearances have been defeats to City — for Chelsea in 2018, for Burnley last month in his only game of a disappointing loan spell, and now for Villa.

Against City, the midfielder looked a shadow of the player who won the Premier League title with Leicester in 2016. Since then, injuries and a lack of chances at Chelsea have damaged a promising career.

Mahrez dribbled past Drinkwater for his first goal. Moments later, David Silva snatched the ball off him before feeding Mahrez for City's second. Drinkwater nearly gave away another goal early in the second half when a loose pass ended up with Aguero.

A month ago, Watford looked a dead cert for relegation but Nigel Pearson has turned things around.

Since his appointment as manager, Watford has played six games in the EPL, winning four and losing just one. Sunday's 3-0 defeat of Bournemouth lifted the team out of the relegation zone into 17th above Villa, Bournemouth and Norwich.

Abdoulaye Doucoure, Troy Deeney and Roberto Pereyra provided the goals for Watford, with some help from disorganized defending by Bournemouth, which has one win from its last 11 EPL games. Bournemouth's fans booed their team at full time.