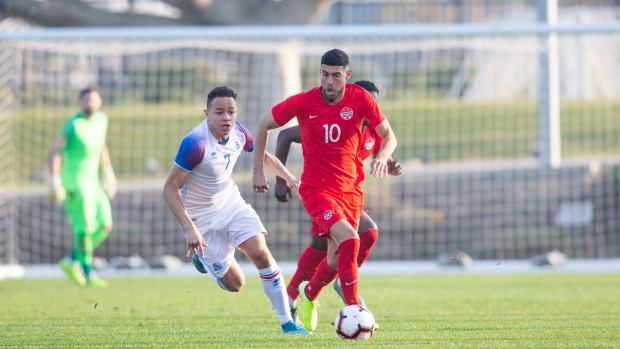 Holmar Eyjolfsson scored for 39th-ranked Iceland, which took a few valuable FIFA ranking points off No. 73 Canada with the win. Down 1-0 at the break, the Canadians came on strong in the second half but were unable to break down Iceland.

"From a performance perspective, that second half I thought we deserved something more out of the game," said Canada coach John Herdman.

"But all in all I think we should have come away with something," he added. "Disappointing not to get the points we were hoping for. But I think some of those young players acquitted themselves well. We had six under-23 (players) out there in that last period of time."

Canada was coming off back-to-back 4-1 wins over No. 162 Barbados last week at the same venue, Orange County Great Park. Eight different players scored for Canada in those two victories.

Wednesday's loss marked the first time Canada had been shut out since a 1-0 loss to El Salvador in October 2017. The Canadians had scored in 15 straight matches.

With a population of around 350,000 — less than London, Ont. — Iceland punches above its weight in international soccer these days. It is coming off appearances in both the 2018 World Cup and 2016 European Championship.

And it proved to be a tough out despite missing some top players, like Canada, given Wednesday's match fell outside a FIFA international window.

Iceland threatened first on a set piece, only to see Crepeau make the save with his foot in the eighth minute. Piette had a half-chance in the 12th-minute but his shot went wide.

Iceland came close in the 20th minute but a shot deflected just wide. Iceland scored on the ensuing corner kick a minute later with Eyjolfsson, who plays for Bulgaria's Levski Sofia, knocking the ball in at the far post after Crepeau was unable to get to the ball through traffic.

Zorhan Bassong, a 20-year-old who plays in Belgium for Cercle Brugge KSV, came in for Laryea to start the second half. Teenage forward Jayden Nelson was introduced

Canada started strongly after the break with Osorio putting a side-volley on target in the 48th minute but it went straight at goalkeeper Hannes Halldorsson.

The game had a particular Iceland flavour in the 60th minute when Kjartan Finnbogason was replaced by Kristjan Finnbogason.

Ricketts put the ball in the back of the net in the 68th minute but the offside flag went up.

Teenager Jayden Nelson came on for Akindele in the 75th minute. A minute late, Crepeau was forced into action with a fine fingertip save on a low shot. Fullback Ashtone Morgan came on in the 80th minute for Adekugbe.

Theo Bair came on in the 90th minute for Canada.

The Canadians are preparing for the start of World Cup qualifying later this year. Iceland is gearing up for a Euro 2020 playoff against Romania in March.

The top six CONCACAF teams after the June international window qualify for the Hex, the most direct route of World Cup qualifying out of the region that covers North and Central America and the Caribbean. The top three finishers in the Hex round qualify for Qatar 2022.

Canada started the year with 1,331.2 points, 15 points behind El Salvador. Canada added 2.26 rating points with the pair of wins over Barbados.

Canada Soccer estimated a win over Iceland would be worth another 3.1 points for Canada. Instead the Canadians will leak a few points.

Coincidentally Iceland plays El Salvador on Sunday. But the game is considered a training match so there will be no FIFA points at stake.

"It's still all to play for," said Herdman.