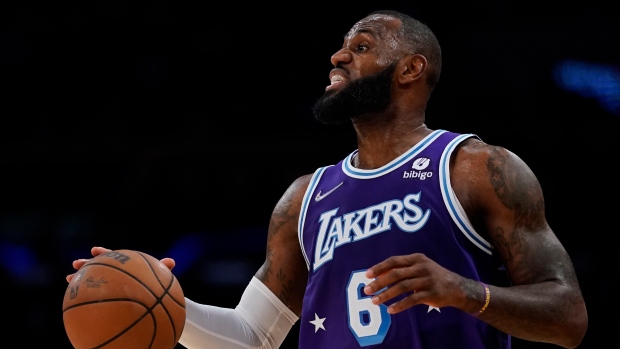 With more than half of the season still to play, there’s no such thing as a lock when it comes to the NBA player awards.

At this point in the season last year (roughly 45 per cent of games played), LeBron James was the MVP favourite for four weeks straight. He was +150 to win that award, with Joel Embiid trailing at +325 and Nikola Jokic at +575.

Anthony Davis went down with an injury (déjà vu) and James was carrying the Lakers to a third seed in the West. Then James suffered an ankle injury that sidelined him for seven weeks and Jokic went on to become the lowest drafted player to ever win MVP.

So far this season, Tyler Herro is the biggest award lock. He’s -260 to win the Sixth Man of the Year Award and it’s not even close. Kelly Oubre Jr. is the next option, and you can snag him for +1500.

But considering all the ambiguity sports leagues and the world have endured for the last two years, can you really be that confident in any of these bets?

Telling you to tail the favourites would be vanilla.

I’m here to cherry-pick three players worth taking a long shot on.

James to win Most Valuable Player +4000

Ask a random group of friends who the top-ranked player in fantasy basketball leagues is right now, and I’m willing to bet only a handful will say LeBron. In his 17-year career, he’s finished as the top dog only once (his second season with Miami).

His improvement in free-throw percentage is the biggest factor, but he’s also averaging more points, three-point shots, and blocks than in any other season since his first stint with Cleveland.

The Lakers are only a game above .500, but James is the last guy to blame. They have a +3.2 net rating with him on-court, -4.4 when he’s resting. All the slander about their poor roster construction during the preseason is ringing true.

But going back to the 2021 LeBron MVP example, look at his statistical comparisons for his first 27 games:

LeBron is producing at a higher level at both ends of the court than his “MVP season” from last year. The only difference is the results in the win column.

Do the Lakers ever close that gap and join the three elite teams in the West?

Probably not. But if the wins suddenly start stacking up with AD sidelined, that +4000 price is going to shrink down quick.

The Nuggets are currently .500. If Jokic can get +1500 odds, LeBron deserves a shorter number.

Full disclosure, I think Morant is very deserving of this award. But I’m here to poke holes and tee up bold predictions.

My first argument is the race from last season.

Julius Randle won the award after increasing his scoring by 4.6 points and doubling his assists from 3.1 to 6.0 per game. The Knicks finished fourth in the East after ending the previous season with a 21-45 record.

The thing is, Randle wasn’t the front-runner from the get-go.

Christian Wood and Jerami Grant fought over the lead for this award with the latter getting as low as -230 by All-Star Weekend. It took a combination of Grant fading and New York making an improbable playoff push for Randle to overtake this award.

Oh, and the Grizzlies currently hold the fourth seed in the Western Conference.

But even with an inaugural all-star selection coming, Morant’s case has a flaw.

Memphis went 10-2 with Morant sidelined. His on/off numbers paint a grim picture regardless of how much weight you put into that stat. The Grizzlies are +0.2 in 879 minutes with him on the court, +6.0 in 1005 minutes with him off.

While he’s not injury-prone, if he misses any more games and the Grizzlies go through the same cycle during his first absence, the noise will only get louder.

That’s a long-winded blurb to say, nothing is set in stone.

Turning our attention to Garland, here’s a guy who simply doesn’t get enough love. His year-over-year stat comparison:

Cleveland’s current roster is a perfect fit for Garland. He has Evan Mobley and Jarrett Allen loitering the paint to finish off his drives and has Kevin Love and Lauri Markkanen as two capable pick-and-pop partners to rain in threes.

Ricky Rubio was instrumental to their success while Collin Sexton soaked up a ton of usage. Now that Garland is the last man standing, all the playmaking responsibility falls on him.

His on/off numbers really jump out beside Morant’s. The Cavs are +9.6 with him on the court, -2.3 when he’s sitting.

Garland’s stats and qualitative improvements are already worthy of this award. But if the Cavs continue this playoff push after being projected for a 12th-place finish by oddsmakers and his numbers go up another level with the increased usage, he will find himself as a finalist at worst.

Cade Cunningham to win Rookie of the Year, +450

It’s funny how these awards can correlate. If Garland gets himself into the conversation for MIP, Mobley likely locks up ROTY.

Cleveland has the league’s best record against the spread suggesting they’ve been the biggest overachievers.

The third-overall pick has been a significant part of the equation.

Mobley has two main arguments going for ROTY: his influence on winning and two-way play.

The only way Cunningham can establish himself as a legitimate threat is to replicate what Timberwolves guard Anthony Edwards did late last season.

Prior to D’Angelo Russell’s seven-week injury, Edwards was averaging just 14.0 ppg in his rookie campaign. After D-lo went down, Edwards flipped the switch and scored 22.0 ppg the rest of the season.

As it stands, here are Cunningham’s season averages:

With no context, those are solid numbers from a rookie.

However, with Grant not projected back until February, now’s his chance to pump up his numbers. Add in the rumours of Grant being shipped off to a contender and there’s an opportunity for Cunningham to become a one-man wrecking crew.

This is Mobley’s award to lose, but if there’s one candidate to usurp him, Cunningham has the best circumstance to level up.