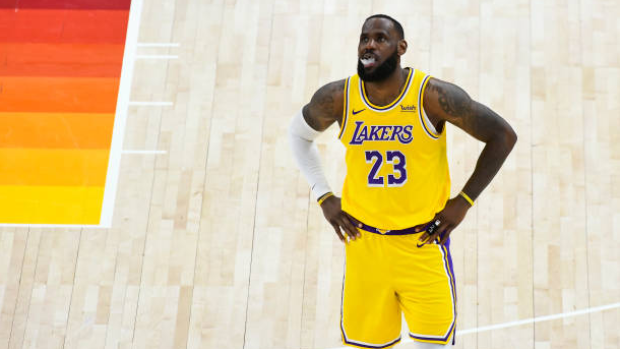 If you’re in a standard head-to-head fantasy league, playoffs are coming in two weeks and chances are you’re stuck with an injured player or two.

Can you afford to have them on your bench?

While many leagues have been customized to have multiple IL spots available, you might find yourself having to consider a brand-name drop.

If you’re in a dynasty or keeper league the decision is significantly more complicated, but if you’re in a re-draft league, it’s all about winning today. You don’t get any bonus points for having a superstar sit on the sidelines.

Using standard league scheduling, here are six of the most difficult hold or drop decisions heading into the playoffs:

To drop or not drop

Harden has been a relatively durable player most of his career, so it wasn’t a surprise to see him attempt to play through his hamstring injury Monday. But if you watched the film, it was a contactless injury – something tweaked and he recognized he wasn’t fully healed. Considering Brooklyn’s depth and their championship aspirations, I’m willing to guess the front office will proceed with caution. Kevin Durant has been out with a hamstring injury for almost two months and while Harden’s injury seems less serious, expect the Nets to hold off until the scans show he’s 100 per cent. Does he sit the rest of the season? Unlikely. If he returns within the next week, consider that a bonus.
Verdict: Hold in all leagues

Adrian Wojnarowski initially reported on Feb. 15 that AD was due to have his calf strain re-evaluated in two to three weeks. Subsequent reports kept deferring his return date, with the last update coming from coach Frank Vogel on March 25 suggesting Davis was still “a ways away.” Now that we’re seven weeks out, fantasy managers are scrambling for solutions with the playoffs looming. Learning from other situations like Jaren Jackson Jr. in Memphis, when the front office is quiet, they likely have nothing positive to share. With this being AD’s longest absence of his career, you also need to factor in an extended ramp-up period upon his return.
Verdict: Hold unless you’re on the brink of elimination

Shams Charania reported on March 25 that James was projected to miss four to six weeks. On the optimistic side of that time frame, LBJ won’t return to the court until April 22, which is four days into the quarter-finals in standard leagues. On the pessimistic end, he won’t be back until May 6, where he’ll have a maximum of three games available during the fantasy finals. Considering his age, the Lakers’ championship aspirations and how they’ve already handled Davis this season, only the most luxurious of teams can support James sitting on their bench.
Verdict: Drop unless you’re guaranteed a first-round bye

When SGA first went down, coach Mark Daigneault suggested it’s not a long-term injury but also not day-to-day. In his last update to the media on March 31, he said SGA won’t be re-evaluated until mid-April. Considering the nature of his injury, OKC would be wise to give the Toronto native ample time to rest and avoid having it become a recurring issue. While it’s reasonable to assume he recovers within their timeline, the Thunder are projected to have their own draft pick for 2021 and are tank candidates. Unlike Kyle Lowry below, Gilgeous-Alexander is still young and will likely heal quickly with proper treatment.
Verdict: Hold unless you’re on the brink of elimination

The decision to drop or not drop Lowry incorporates additional factors beyond his health. The Raptors are in a peculiar spot, juggling a push for the play-in tournament versus tanking for a lottery pick. They’ve also been using these games to develop some of their younger players like Gary Trent Jr. and Malachi Flynn. As of now, Lowry is reportedly out until April 10, with Nick Nurse last commenting that his recovery “was not going very well.” Reading the tea leaves, it wouldn’t shock me to see Lowry miss the next four games. Factor in three more back-to-backs in the Raptors schedule, which he could potentially miss, and he might only play in 11 of their remaining 18 games (61 per cent).
Verdict: Drop unless you have a playoff berth secured

The Charlotte Hornets PR team announced April 3 that Hayward will be re-evaluated in four weeks. Usually when a team publicly lists an evaluation date, the player almost never beats the timeline. Once again looking at the head-to-head schedule, the fantasy finals is set for May 3, approximately four weeks away. In the most improbable of scenarios, if Hayward defies the odds and comes back ahead of schedule by a week, he gives you some limited minute games in your semis and potentially a full slate in the finals. Realistically, he doesn’t return until early May and is placed on a minutes restriction during your finals.
Verdict: Drop unless you have an available IL slot