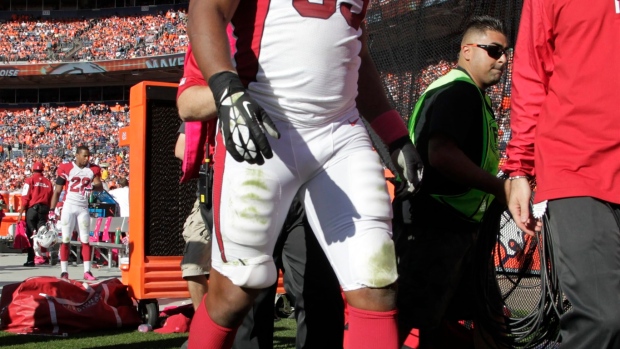 7 Cardinals injured against Broncos; Shaughnessy on IR with chance to return Article Image 0 , The Canadian Press

TEMPE, Ariz. - The Arizona Cardinals lost seven players due to injury in Sunday's loss at Denver, and one of them — starting outside linebacker Matt Shaughnessy — will go on injured reserve designated to return.

Shaughnessy, who has knee cartilage damage, cannot play in a game for eight weeks, meaning he could come back for the final four games of the season.

Defensive end Calais Campbell, injured in what coach Bruce Arians called "the dirtiest play" he's seen in his 37 years in the NFL, has no structural damage. Arians said Campbell is out one to three weeks with an MCL strain.

There is great uncertainty at quarterback, with a chance Carson Palmer and/or Drew Stanton could be back for Sunday's game against Washington. But Arians said "there's a good chance neither one of them" will play.

The damaged nerve in Palmer's throwing shoulder responded to treatment he received from a specialist in Denver. The quarterback, injured in Arizona's season-opening win over San Diego, threw 20 passes from a distance of 10 yards on Sunday and will throw more on Tuesday, Arians said.

"Carson is feeling much better today," Arians said at his Monday news conference. "No residual effects from throwing, so he's continued on his treatment and is on the way back. So he and Drew are possible for this ball game."

Stanton is going through the NFL-mandated concussion protocol.

In order for Palmer to play against the Redskins, he would have to go through a full practice and be able to make all his normal throws, Arians said.

With rookie Logan Thomas the team's only healthy quarterback, the Cardinals could be looking to sign someone. Anyone the team signs, Arians said, hopefully would be familiar with the team's offensive system. Any new signee would be a backup to Thomas, Arians said.

Second-year pro Alex Okafor will start in place of Shaughnessy, the coach said. A combination of players, including rookie Karim Martin, will fill in for Campbell.

Asked how Martin played on Sunday, the coach said, "Not so good."

The NFL issued a statement on Monday verifying that Campbell was injured by a chop block by Broncos tight end Julius Thomas in violation of a league rule. Thomas blocked Campbell "in the area of the thigh or lower" while Ryan Clady engaged the big Arizona defensive lineman "simultaneously" with a high block, the statement said. The play drew a 15-yard penalty.

NFL spokesman Michael Signora said "a decision on a possible fine will be made later this week."

Arians said the proper punishment would be to suspend the culprit as long as Campbell is out "but that's not the way it is."

"To set somebody up there and another guy chops you, I haven't seen that one ever," he said.

Arians said he brought up the play in his brief postgame conversation with Broncos coach John Fox.

"He had no clue," that the play had occurred, other than it drew a penalty, Arians said. "I respect John."

Inside linebacker Larry Foote said "current players, ex-players, they should be disgusted with that play."

"I'm waiting to see what the league does," Foote said. "That looked like 'Karate Kid,' 'Sweep the legs, Johnny.' It was ugly. That's a black eye to football — period. Even their own players knew it. Yeah, they said something, even the linemen. Hopefully it isn't coming from the sidelines. I don't want to play that game. But that should be dealt with. It don't get no uglier than that."

Cornerback-special teams player Justin Bethel has an AC sprain but "should be able to go this week," Arians said, while cornerback Patrick Peterson has a low ankle sprain and "should be fine."

Punter Dave Zastudil reinjured his groin against the Broncos, which could mean a return of Drew Butler from the practice squad.

Rookie tight end Troy Niklas has a high ankle sprain and probably will not practice Wednesday.