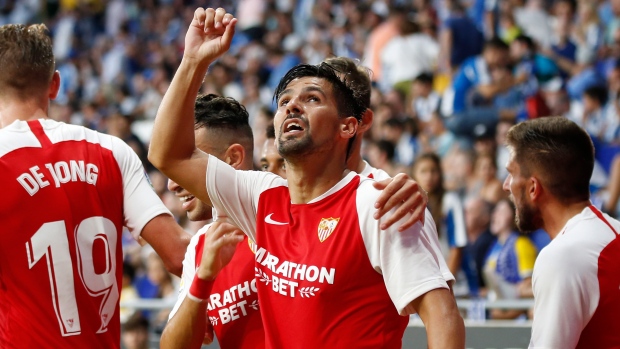 BARCELONA, Spain — Midfielder Joan Jordán scored in the second half to help Sevilla beat Granada 1-0 on the road and win its second match in as many rounds in the Spanish league on Friday.

Jordán, one of several summer signings by Sevilla, finished off a shot by Luuk de Jong that was blocked by a sliding defender after Jordán set up his striker in the 52nd minute.

Granada, promoted this season, succeeded through its pressure to disarm Sevilla's attack in the first half, but the host's efforts waned after Jordán's goal.

"We are very motivated and I think we can get a lot better," Jordán, a former Eibar player, said.

The visitors lost right back Sergio Reguilón when he couldn't recover from a hard head knock with Granada's Victor Díaz and was carried off on a stretcher in tears in the 18th.

Sevilla is coached by former Spain and Real Madrid manager Julen Lopetegui. It won its opener last weekend at Espanyol 2-0.

Villarreal goalkeeper Andrés Fernández stopped the first penalty, but a video review revealed Fernández left his line too early and the penalty was retaken.