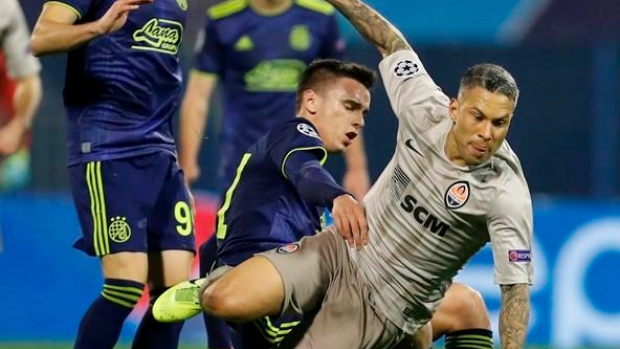 ZAGREB, Croatia — Shakhtar Donetsk needed a penalty in the eighth minute of added time to salvage a 3-3 draw with Dinamo Zagreb in the Champions League on Wednesday.

With both teams targeting qualification for the knockout stages, and both down to 10 men after red cards, Dinamo scored in the 83rd and 89th minutes to lead 3-1.

Junior Moraes raised Shakhtar's hopes when he scored in the third minute of added time. Then came more drama when Shakhtar goalkeeper Andriy Pyatov went into the opposition penalty area for a corner and was fouled.

After a lengthy video review, Tetê stepped up to hit the 98th-minute penalty.

The second draw between Dinamo and Shakhtar leaves them level on five points in Group C as they likely fight for the second qualifying spot on offer. Leader Manchester City has 10 points and last-place Atalanta one point after they drew 1-1 in Wednesday's other group game.