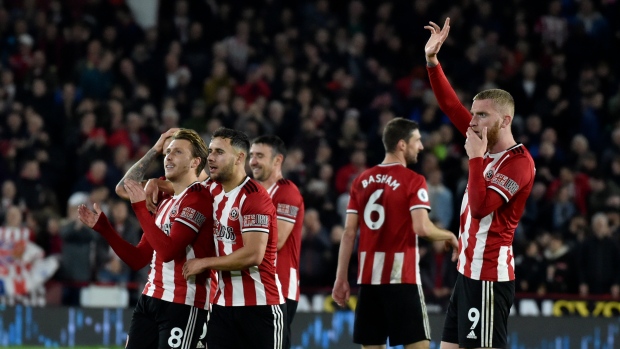 SHEFFIELD, England — Arsenal slumped to a 1-0 loss at promoted Sheffield United on Monday in the Premier League, upping the pressure on coach Unai Emery after another performance void of creativity and flair.

Lys Mousset took advantage of poor defending from a corner to tap in from close range in the 30th minute and Arsenal never came close to an equalizer despite fit-again striker Alexandre Lacazette making his return from an injury in the second half.

The loss means Arsenal missed a chance to go third in the standings, remaining in fifth instead, while Sheffield climbed to ninth after its first home win since Aug. 18.

"We limited them to few chances and backed up a good performance with a good result," Sheffield manager Chris Wilder said. "We wanted to make sure if we played well against a top side we got something from the game and three points is a great reward for the players."

With playmaker Mesut Ozil once again left out of the squad completely by Emery, Arsenal struggled to create chances throughout the game — and the one good opportunity the visitors did create was wasted by the club's record signing Nicolas Pepe, who missed from a few yards out after a cross from Sead Kolasinac. Defender Sokratis appealed for a penalty when his shirt was pulled in the area, but referee Mike Dean waved play on.

Emery threw on attacking midfielder Dani Ceballos, Lacazette and Brazilian teenage forward Gabriel Martinelli in the second half, but the Gunners still couldn't create a single chance to score.

Right-back Calum Chambers had a half-chance when the ball fell to him in the area, but his shot was deflected out for a corner.