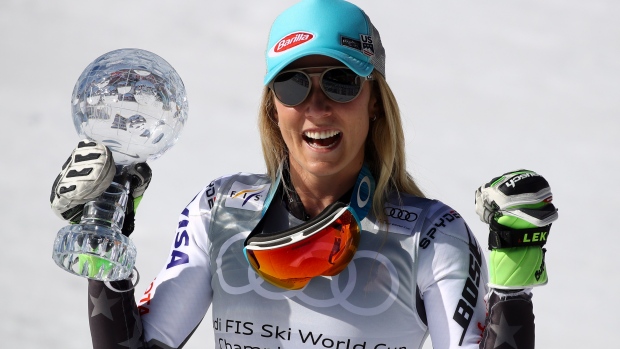 Embodying the Olympic motto in a World Cup slalom Saturday, Mikaela Shiffrin went faster in her second slalom run and higher in the World Cup all-time lists by being stronger than Wendy Holdener to win an intense duel.

"It was just a really amazing day to be racing," Shiffrin said in the sun-bathed finish area in Andorra, one hour after Alexis Pinturault also set a record winning the final men's giant slalom of the season.

Pinturault became the most prolific French skier on the 52-year World Cup circuit with his 23rd career victory.

Trevor Philp of Calgary was 16th.

Shiffrin had trailing 0.28 seconds behind first-run leader Holdener and won by just 0.07 after both racers visibly pushed their limits slicing through the gates.

Holdener's unlucky defeat extended her own unwanted World Cup record with a 22nd career podium finish in slalom without a victory.

That's the most top-three placings in a single discipline without winning for any man or woman in World Cup history.

"I can see the frustration in her eyes," Shiffrin said. "I have a lot of respect for Wendy. She is so strong."

Shiffrin, the 2014 Sochi Olympics gold medallist , earned 100 race points to lift her season-long total in the slalom standings to a remarkable 1,160 — more than every woman skier's total over all disciplines, except for overall standings runner-up Petra Vlhova.

Shiffrin's mammoth 2,104 points overall — the second-highest total ever — is more than 800 ahead of Vlhova. Holdener is third.

Vlhova placed third Saturday but trailed more than a second behind the standout leading pair.

Pinturault retained his first-run lead to finish 0.44 seconds ahead of Swiss prospect Marco Odermatt, who earned a career-best result.

Zan Kranjec was third, trailing 1.03 behind Pinturault, who broke a tie with Carole Merle for the all-time record by a French racer. Merle got her 22 wins in giant slalom and super-G from 1988-93. Alpine great Jean-Claude Killy won 18 times.

"It's really cool to have this globe," Hirscher said, holding the crystal trophy he also won in 2012. "It's surreal to have it for six years now."

The Austrian star has also secured a record eighth straight overall World Cup title, though had his lead cut to 415 points by Pinturault ahead of the season-ending slalom on Sunday.

The World Cup finals meeting ends Sunday with overall champions Shiffrin and Hirscher favoured for victory in, respectively, a giant slalom and slalom.