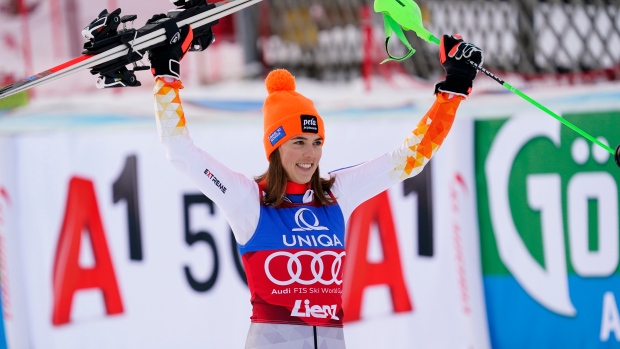 In the last event of the calendar year, the Slovakian skier held onto her first-run lead and beat world champion Katharina Liensberger by .51 seconds. The Austrian was cleared to race only two days ago after quarantining to recover from a coronavirus infection.

“It feels good because today it wasn’t easy," Vlhova said. "It was really tough. We were so close (after the first run), a lot of girls.”

Swiss skier Michelle Gisin finished .68 behind in third, ahead of Katharina Truppe of Austria, who climbed from 13th place after posting the fastest second-run time.

Shiffrin had to sit out the event following a positive COVID-19 test that also forced the American out of Tuesday’s giant slalom on the same hill.

Vlhova extended her lead over Shiffrin to 120 points after four of the nine slaloms scheduled this World Cup season. The American, who has won the slalom title six times, remained in the overall World Cup lead.

Vlhova and Shiffrin shared the top two spots in the previous three slaloms this season, with the Slovakian winning twice in Levi, Finland, before the American won in Killington, Vermont.

“I have big confidence in slalom right now,” said Vlhova, who earned her 15th win in the discipline and 23rd overall.

Vlhova won the overall title last year after starting in all 31 events, but has been reducing her schedule so far this season to only slalom and GS. She announced before the season that becoming the first Slovakian skier to win a medal at the Beijing Olympics in February was her main goal, rather than defending the overall title.

On Wednesday, Vlhova held only a slim lead of .08 over Gisin after the opening run. In absence of Shiffrin, the Slovakian had expected to be further ahead.

“Honestly, maybe I didn’t expect to have a race, like, really close but conditions were perfect and setting (of the gates) both runs was not easy — but easier than other races,” Vlhova said.

Leading Liensberger by .27 seconds after the opening run, Vlhova lost more than two-tenths following a mistake halfway down her second run but accelerated in the final section for a clear win.

Liensberger was pleased with her first podium of the season, having missed several training days because of her quarantine.

“I am really mega happy it ended this way. I knew I had to push, I gathered all my strength and kept going until the finish,” the Austrian said. “I just skied to have fun and it will be good to get back to 100% of my strength.”

Dropped from second to third, Gisin was quick to take the positives. The Swiss skier suffered from glandular fever in the offseason and was still dealing with the aftermath of the disease.

“It was a difficult time, a dark valley. You feel like it never changes and then it slightly starts to improve," Gisin said. “It means a lot to me. I am very grateful for the improvement.”

No fans were allowed at the event in the Lienzer Dolomites amid anti-coronavirus measures in Austria.

The women’s World Cup continues in 2022 with a night slalom in Zagreb on Tuesday. It was unclear whether Shiffrin will be able to compete in the Croatian capital, where the American has won four times.