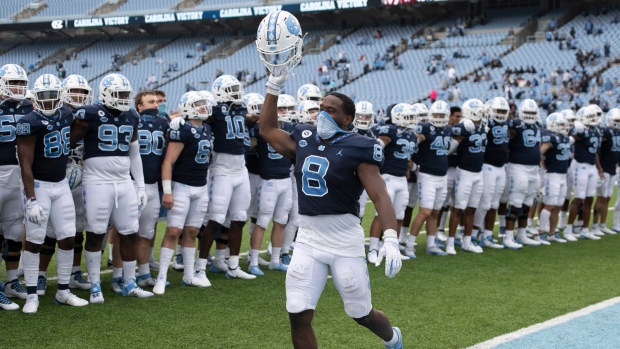 There is only game between ranked opponents this weekend and it is a big one as the No. 3-ranked Georgia Bulldogs go to Tuscaloosa to take on the second-ranked Alabama Crimson Tide in a battle of the two best teams in the SEC.

Here are my picks in the Week 7 edition of Simmons vs. The Spread.

At first glance, a number like 22.5 might seem like it’s a little too high. However, you have to put in to perspective how bad this Kansas team really is. On top of that, the Jayhawks will not have coach Les Miles with them on the sidelines this weekend after he tested positive for COVID-19. The Mountaineers boast a solid defence, which is bolstered by the emergence of two Canadians in Alonzo Addae and Akheem Mesidor. Hopefully we will be hearing a whole lot of “take me home country roads” in Morgantown on Saturday.

Tennessee had a promising first half last weekend led by two touchdown catches by Josh Palmer, but it all came to a halt in the second half as Georgia held them off the scoreboard. Kentucky, on the other hand, held a Mike Leach offence to zero points, which is almost unheard of. Kentucky’s offence can struggle moving the ball through the air at times (73 yards passing last week). Do not let the 40 points they put up against Ole Miss fool you. Tennessee has a solid defence. This game has the makings of a 23-13 type of score, so I’m taking the under.

This is one of those games where whatever the total is, you just take the over. Both of these teams are offensive machines. At times, it seems like they consider defence optional. Brady White can move the ball at will for Memphis. On the other side, expect Dillon Gabriel to return to form after a tough outing against Tulsa. Both teams are in big need of a win to get back in the mix in the AAC. This game could come down to which team has the ball last. Just take the over and sit back and enjoy the offence.

If you watched the Notre Dame/FSU game last week you would see that Florida State had zero business covering. A few sloppy mistakes by the Irish gave them points and led to a misleading final score. Despite that they still lost by 18 points! That is how bad this Seminoles team is. UNC, on the other hand, had a breakout offensive performance led by the two-headed monster at running back in Michael Carter and Javonte Williams who ran for a combined 383 yards. Sam Howell shook off whatever sophomore slump whispers there may have been, completing 78 per cent of his passes and three touchdowns. UNC wins big here.

Boston College is one of the most improved teams in the country so far under new coach Jeff Hafley and pulled off the 31-30 overtime win against Pitt last week. Virginia Tech is coming of a shootout loss to North Carolina and some of the issues they have had on defence really showed in that game. Phil Jurkovec has really impressed moving the ball downfield for BC, something this offence has lacked since maybe Matt Ryan. Call me crazy, but I think BC has a chance to win this game outright so I will take the 12.5 points.

This is the game of the season so far. We have a classic styles matchup between the elite Georgia defence and Alabama offence. Mac Jones has quietly put together incredible numbers for the Crimson Tide so far and should be in the Heisman Trophy discussion. Georgia looked incredible in the second half of last week’s win over Tennessee and Kirby Smart will certainly want this win over his former employer. In the end, I just don’t think anyone can stop the machine that is Alabama’s offence. While Stetson Bennett has impressed he will not be able to go score for score all night with Jones, Waddle, Metchie and Co.

BEST OF THE REST

We have a battle of the Cougars here to get the party started on Friday night. Houston finally had their season debut last Thursday and the offence showed a lot of improvement in the second year under Dana Holgorsen. The breakout player for the BYU offence has been big play threat Gunner Romney who carries a well known last name in the state of Utah.

This is the most publicly played game this weekend and all the money is on Georgia Southern. As I’ve said before, when that is the case I FADE Danny Public. I would not advise anyone to watch this game, but there will be lots of chances for UMass to cover that massive number. Also of note, this is UMass football’s Super Bowl as it’s their only game on the schedule this season. The school initially opted to cancel its football season due to the COVID-19 pandemic before opting to take the field last month.