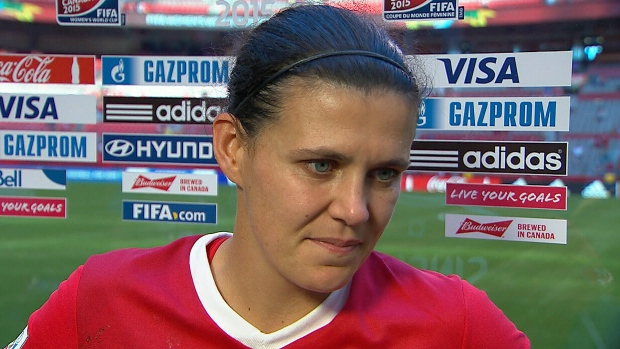 NATAL, Brazil - The Canadian women's soccer team had to settle for second place in the group phase after dropping a 2-1 decision to host Brazil at the International Tournament of Natal on Wednesday.

All the scoring came in the first half.

Andressa Alves opened the scoring for the Brazilian side in the 12th minute and Debinha made it a 2-0 match in the 40th.

Josee Belanger responded for Canada in the 42nd minute to make it a one-goal game heading into halftime.

"The beauty with Josee is she scores as a forward and when we want that attacking threat, she goes in at fullback," said Herdman. "She gives a little more, going forward with our attacking ability, and I think that's what this team is becoming — more flexible."

Canada's Christine Sinclair — who tied American superstar Mia Hamm for second on the all-time women's scoring list with goal No. 158 of her career on Sunday in a 4-0 win over Trinidad and Tobago — earned an assist on Belanger's goal.

Despite the loss to the host nation, the Canadian squad had already earned a berth in the final of the four-nation tournament, which will be against Brazil on Sunday.

"We knew it was going to be a tough game, physically but also mentally," said Belanger. "It was a good test for us. We had a few chances, obviously we would have liked to win, but we know now what to work on for the final. It was a good start and we will be ready for the next game."