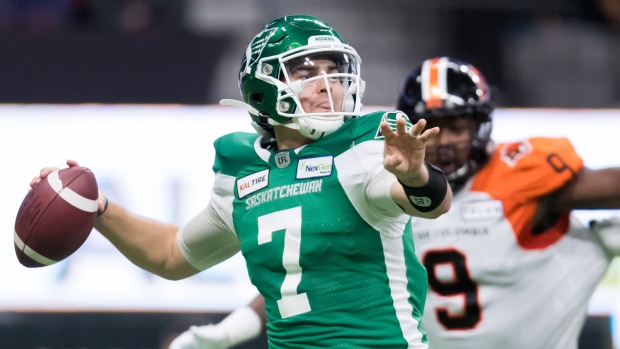 The Canadian Football League remains deep in talks with the owners of the XFL about a potential collaboration that could mean a new league, new business model and a new game.

To put it bluntly, a potential tidal wave of change could hit professional football in this country.

But what if a deal doesn’t happen? How does the CFL manage its way into the future as a nine-team league?

After speaking with senior officials from across the league, Dave Naylor and Farhan Lalji share their perspectives on how a nine-team CFL would have to adapt for the future.

Finding new sources of revenue is an age-old challenge in the CFL.

It’s the quest that led to U.S. expansion a generation ago, gave birth to the long-term strategy known as CFL 2.0 and is the fuel behind talks with the owners of the XFL.

So how does a nine-team CFL find new sources of revenue? The answer, most within the league seem to believe, is via the legalization of single-game sports betting in Canada.

How much of a windfall this represents is still a mystery, although most believe it could represent an annual influx of between $1.5 and $2 million per team, based on league and team deals, once the market for partnerships in Canada is established.

That’s a significant amount in a league with a salary cap of $5.25 million.

There are reasons to believe the CFL is well-positioned in this area, given that football is by far the most popular betting sport in North America. Most of that, of course, is directed at the National Football League.

However, the CFL sees an opportunity to be the primary focus of legal football betting between the start of its season and the opening of the NFL season in September. To that end, expect there to be conversations about moving up the start of the season by three to four weeks if there is no XFL deal, in order to give the CFL a longer period of wagering exclusivity.

The hope is that sports betting will have spinoff affects as well, everything from engaging younger fans to improved television ratings.

How quickly all of this can happen is an open question. While Canada is expected to legalize single-game sports betting before the end of the year, only Ontario has established a framework to license sportsbooks to operate within its jurisdiction. That means CFL teams in the other five provinces won’t be able to make deals with anybody besides the provincial regulator.

Beyond revenue from sports betting, there aren’t any new pots of gold on the CFL’s horizon.

One benefit of the pandemic is that it has forced teams to diversify their revenue strategies beyond the 10 home games per season. Teams have been able to find new business opportunities by taking advantage of their brand or services to drive revenues on the other 355 days of the year.

These included new online sales and licensing, various sponsored social media contests and community initiatives. In some cases, sponsors found they preferred these opportunities to what they were getting just on game days, so expect teams to continue to build on this approach going forward.

There is room for improvement in driving revenues from the country’s biggest markets in Toronto, Montreal and Vancouver, and with engaging newer Canadians. But those are long-standing problems that won’t be changed overnight and for which there is no magic formula.

Teams talk of continuing their push towards digital advertising and outreach, using data and technology to connect with fans, engaging with them year-round to build depth into their fan base to better sustain down years.

Over the past 15 months, CFL teams have been busy trimming or streamlining their organizations to the degree that every team will emerge this season with between $1 million and $1.5 million in operating cost reductions, compared to 2019.

There may be opportunities to further streamline costs by teams working together on national deals for travel and accommodation.

Most teams cut between 50 to 70 per cent of their business operations during the pandemic, and while staff will be brought back, there does not appear to be any team that will return to their full pre-pandemic staffing levels.

Leaner administrative and business operations will likely become the norm as teams look to rationalize their expenses. There has also been more collaboration across the league in this area. Expect teams to outsource more, use consultants and seasonal contracts, rather than hire their own full-time staff as frequently as they once did.

Cost cutting is a fine line, however, and there is no appetite to continue to carve into this area as a means of improving the league’s long-term economic outlook.

Scouting staffs and some areas of football operations might remain scaled-back for the foreseeable future, but there appears to be no support for drastic measures such as reducing the sizes of rosters or coaching staffs.

CFL teams have decided to spend closer to the salary floor of $4.75 million than the salary cap ceiling of $5.25 million this season, which they are entitled to do under the collective agreement. That agreement expires at the end of the 2021 season, which means the league could attempt to reduce player costs in a new agreement, albeit not without a fight from the CFL Players’ Association.

In the immediate term, the league is expected to strengthen its policing of injury lists, where teams often play fast and loose so that they can stash additional players for depth, which drives up expenses.

Revenue sharing is another area the CFL has spent considerable time examining during the past 15 months as a means of stabilizing the health of all nine teams.

Everyone agrees with it philosophically, but executing it remains a tricky puzzle to solve.

The league currently shares national sponsorship, TV revenues and there is a breakdown of Grey Cup revenue that goes to every team. Sports betting partnerships made at the league level would be shared equally, potentially increasing the percentage of overall league revenue that is shared equally between all nine teams.

After that, it gets tricky.

In most professional sports leagues, revenue sharing trickles down from the biggest markets and most well-heeled owners to the smaller markets. In the CFL, the biggest revenue teams are the community-owned franchises in Edmonton, Winnipeg and Regina, while the weakest are in Toronto, Montreal and Vancouver.

But there is also the suggestion that while the larger markets are struggling at the gate, they perhaps bring more value to the national TV deal and national sponsorships than some of the smaller markets.

All the teams understand why revenue sharing will make a healthier league and are open to the concept. But the redistribution of revenues would have to come with accountability and demonstration of investment as the healthier teams are believed to be opposed to anything that looks and feels like a handout.

The challenging dynamics of redirecting dollars from smaller community-owned franchises to the larger markets are obvious.

While the CFL has spent considerable time examining and debating how this might work, finalizing a framework remains a work in progress – and one that won’t take effect until 2022 at the earliest, given there will be minimal revenue, and certainly no profit, in 2021.

The question as to whether the CFL could survive post-pandemic as a nine-team league has been central to the debate over potential collaboration with the owners of the XFL.

Besides sports betting, there aren’t any obvious new sources of revenue for teams, meaning the league will have to also rely on best practices, belt-tightening and potential revenue sharing to keep itself viable into the future.

Question remain about whether those measures are enough to improve the league’s business model to the degree that it can present owners in its three biggest markets with a viable business, something they’ve been lacking in the years leading up to the pandemic.