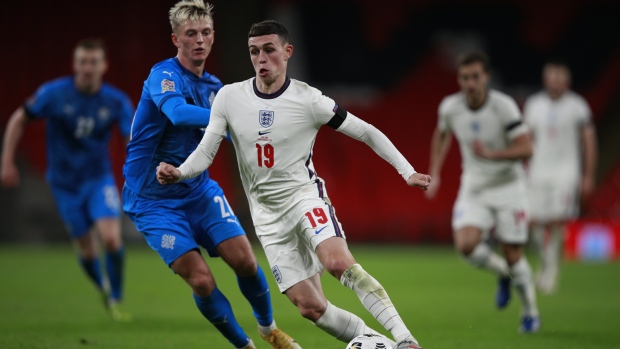 In a tournament featuring 624 of Europe’s top players, there are dozens of potential game-changers set to take the pitch at Euro 2020, but for the sake of brevity (and wrist strain), we’re going to narrow the focus down to one player from each group to keep an eye on as the tournament is set to kick off Friday afternoon on TSN.

This summer appears to be a big one for the 23-year-old Lecco native. Not only is Locatelli poised to play a key role in Roberto Mancini’s Azzurri, but he’s likely on his way back to a big club from Sassuolo during the upcoming transfer window.

Capped 10 times already by the senior side, Locatelli’s importance to the Azzurri’s midfield is magnified due to the absence of Marco Verratti. While the Paris Saint-Germain midfielder was included on Italy’s 26-man roster, the odds of him seeing match action remain low. The 28-year-old Verratti incurred an MCL injury early last month that ended his Ligue 1 season prematurely. The recovery time given for his injury by PSG would put Verratti out of action until at least late June.

What Locatelli offers from the heart of the midfield is playmaking capability coupled with defensive responsibility. With the ability to operate as a box-to-box midfielder, Locatelli has a keen eye for distribution and will be vital to the Azzurri’s ability to control possession. During this past Serie A season, Locatelli led the league in pass attempts with 2,749 and had a completion rate of 88 per cent. On the other side of the ball, Locatelli had nearly 11 ball recoveries a game, crucial to snuffing out counters.

As for his future, Locatelli doesn’t appear long for Sassuolo. Having spent the last three seasons with the Neroverdi, after having come over from Milan where he made his senior debut, Locatelli’s name has appeared in transfer speculation on an almost daily basis over the past several weeks. The team Locatelli has been most frequently attached to is Juventus, with recent reports that he has come to personal terms with the club. But interest remains with the likes of Manchester City and Liverpool, leaving Sassuolo with no shortage of suitors to sell the player. Currently, Transfermarkt has a £31.5 million valuation placed on Locatelli, but a strong Euro could see Sassuolo command a much higher fee.

Finland is making its maiden voyage at a major tournament at Euro 2020 and enter the 16th European Championship as one of its biggest underdogs. At 500-to-1 odds, only North Macedonia and Slovakia are seen as bigger longshots. But that’s no reason for despair in a tournament where the stranger things that could happen often do. While Belgium and Denmark are the heavy favourites to emerge from the group, the Finns can attempt to emulate Iceland’s magical run from 2016 and become the tournament’s Cinderella story.

Now, that will obviously be easier said than done, but for anything close to that even happening, Teemu Pukki will need to play a big role in it. And that’s fine by Pukki, a man who’s become a legend at Carrow Road in his three seasons at Norwich City. Helping to orchestrate the Canaries’ return to the Premier League after a one-season dip to the Championship, Pukki once again took the league by storm. While he didn’t match his previous heights of 29 league goals in 2018-19, the 31-year-old Pukki’s 26 goals were third in the Championship as Norwich claimed its second Championship crown in three seasons. In three seasons with Norwich, Pukki has now scored 67 goals over 126 appearances in all competitions.

While Finland only scored 16 goals in its 10 Euro qualifying matches, 10 of them came from Pukki. Capable of playing as a lone striker or in a 4-4-2, Pukki runs well in the box and can produce from just about anywhere, whether it’s shot from just inside the area or one taken after deftly shielding the ball from defenders, one of Pukki’s finest attributes. A smart player with a nose for goal, Pukki is rarely out of position.

If there is any concern for manager Markku Kanerva about Pukki heading into the tournament, it’s fitness. An ankle injury picked up early last month in a 4-1 win over Reading meant that Pukki missed Finland’s final two tune-up friendlies and remains a question mark for its opening match against Denmark on Saturday.

Few people have been as critical to the rise of Atalanta from the bottom half of the Serie A table to a perennial Champions League side than midfield maestro Ruslan Malinovskyi. Arriving from Genk two seasons ago, the 28-year-old Malinovskyi has impressed with his passing and vision, which is why he’s been attached with moves to the likes of Inter and Chelsea in recent weeks.

Malinovskyi’s influence exploded when Atalanta manager Gian Piero Gasperini switched his tactics and altered his preferred formation to a 4-2-3-1 from a 3-4-1-2. The change allowed for Malinovskyi to assert himself as midfield quarterback, drifting in from the right into a more central role where he can dribble in deep to take booming shots of his own or deftly find a teammate cutting into the area. Last season, Malinovskyi finished in the 92nd percentile for passes completed among Serie A midfielders (42.56 per 90 minutes), the 96th percentile for long passes completed (6.88 per 90 minutes) and 97th percentile for passes into the area (2.9 per 90 minutes). The most impressive metric for Malinovskyi might be his 6.12 shot-creating actions per 90, putting him in the 99th percentile.

While Malinovskyi scored three of Ukraine’s 17 goals in eight qualifying matches, it will be incumbent on him to provide service for the likes of Andriy Yarmolenko, Roman Yaremchuk and Artem Besyedin. Looking at the competition in Group C, manager and national icon Andriy Shevchenko likely sees a path to the knockout round in the offing for Ukraine, but to get there, he’s going to need Malinovskyi’s brilliance.

The age of Phil Foden is upon us. Fresh off of being named Europe’s most valuable player by CIES Football Observatory (a mouthwatering £163.4 million) and the PFA Young Player of the Year, the 21-year-old Manchester City attacker heads into the Euro with a fresh new haircut, looking like the second coming of Gazza at Euro ’96.

Few teams are blessed with the plethora of attacking options that Gareth Southgate has at his disposal and Foden is one of his most lethal. With Pep Guardiola famously preferring a false No. 9 for most of the season, Foden has most often been deployed on the left side and has thrived there. Foden averaged 38.18 touches in the attacking third per 90 minutes in the Premier League this season, scoring nine goals and adding five assists. With an incredible amount of finesse and ball control, Foden’s first touch is among the best the Premier League has to offer and makes him an asset virtually everywhere on the pitch.

But because of the wealth of weaponry the Three Lions possess, where Foden fits in on this team and who he might play alongside remains to be seen. Not only has Southgate employed players not even on England’s final roster in their final tune-up matches, he’s experimented with a number of formations heading into their first tournament match against Croatia. In a 3-4-2-1 formation, Foden could potentially slot into the left side behind Harry Kane and opposite City teammate Raheem Sterling, but would face competition from Marcus Rashford for a starting role. But should Southgate opt for a more traditional back four and slot three players behind Kane, Foden would be a potential fit between Rashford and Sterling. One way or another, Foden will have the opportunity to leave his mark on Euro 2020.

For the first time in eight major tournaments, Sergio Ramos will not be patrolling Spain’s backline. The 35-year-old Ramos, who may or may not leave Real Madrid this off-season, was not selected by Luis Enrique for his final 26-man squad with the former Barcelona boss choosing a youth movement. Of the 26 players on the Spain roster, only five players are over 30 years of age with acting captain Sergio Busquets, who will be 33 next month, the oldest.

The man set to inherit Ramos’s mantle as the stalwart at the centre of the Spanish defence is 24-year-old Villarreal star Pau Torres. Capped only eight times heading into the tournament, Torres will partner with Manchester City’s Aymeric Laporte as Enrique’s first-choice pairing in central defence. With Torres, the backline is in good hands and the Euro could end up being the springboard for his arrival at one of Europe’s top clubs in the upcoming transfer window.

What might be the most impressive aspect of Torres’s game is a level of speed you wouldn’t normally associate with a player of his height. At 6-foot-3, Torres is more than capable in winning aerial duals, but quickly coming across the area to snuff out attacks is something you’ll see frequently from one of the key contributors to the Yellow Submarine’s Europa League triumph last month. On top of the ease in which he operates in the area is his unflappable nature with the ball. Even under heavy pressure, Torres rarely can be baited into a cheap giveaway or a poor pass.

It’s this type of play that Torres on the radar of some of Europe’s top clubs with quality central defenders coming at a premium. While Torres says he’s happy at Villarreal, especially with Champions League football on the horizon next season, don’t be surprised to see him ply his trade elsewhere when the new season starts in August. Among the likeliest destinations for Torres is Old Trafford with Manchester United, the team Villarreal defeated in the Europa League final, said to be very interested in his services.

You can be forgiven if you’re shocked to see Karim Benzema suit up for Les Bleus again. At 33 and outside of the national setup for five years, it appeared that the Lyon native’s international career was over. A contentious and combative relationship with both manager Didier Deschamps and bigwigs at the Federation Francaise de Football didn’t help Benzema’s case, either, but he held out hope that he would once again play for his country. With Anthony Martial injured and Nabil Fekir’s move to La Liga not working out as planned, Deschamps made the call to bring Benzema back into the fold.

A few hearts dropped when Benzema left France’s friendly with Bulgaria early with an apparent knee injury earlier this week, but Deschamps says that he expects to have Benzema available when Les Bleus kick off their “Group of Death” campaign on Tuesday against fellow heavyweight Germany and his presence is a tantalizing one. Like England’s, France’s attacking options are an embarrassment of riches. The sheer firepower Deschamps can choose from might be unmatched, but Benzema might be able to unlock something in attack Les Bleus haven’t had in years.

Olivier Giroud has played more for country than club in recent years, having settled nicely into a super sub role, first with Arsenal and then with Chelsea. It’s a role that he excels in, but Benzema’s ability to play off Cristiano Ronaldo for years like he did at Real Madrid, perhaps, make him a more suitable option for Deschamps when it comes to a centre forward who can pair well with Kylian Mbappe and Antoine Griezmann. Of course, for this to work, France can’t simply rely on long balls up the field for Benzema to latch onto, like they’re guilty of at times with Giroud, so an updated approach to his offensive tactics will be required of Deschamps, something he’s more than capable of doing.