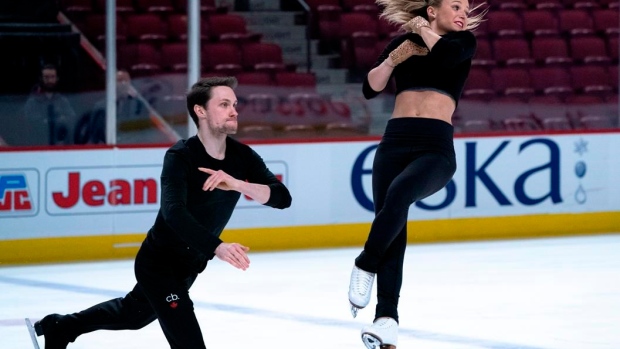 OTTAWA — Skate Canada announced on Monday that the 2021 National Skating Championships and Skate Canada Cup have been cancelled.

Skate Canada says the two events are being cancelled because of the "evolution of the COVID-19 pandemic across Canada."

The second wave of COVID-19 forced Skate Canada to hold the Skate Canada Challenge virtually this past weekend. Skaters performed their programs at their home rinks over the past few weeks, then submitted videos, which were broadcast and judged in real time in an effort to simulate a live competition.

The virtual Challenge, held after a almost year-long layoff from competition for Canadian skaters, was a qualifying event for the upcoming Canadian championships.

Almost the entire Canadian team has been grounded since the global pandemic began. The world championships last March in Montreal were one of the first major international events scrapped due to COVID-19. Skate Canada International in October was also cancelled.

“Due to the continuous shift in requirements across the country, the inability of our athletes to train due to the closure of ice rinks and the number of participants that would be required to travel, it became clear that it would not be possible to host these events," said Debra Armstrong, CEO of Skate Canada.

"The health and safety of our community is our priority and we thank you all for taking the necessary precautions and doing what you can to limit the spread of COVID-19."

The Skate Canada Cup was planned to be a virtual event in replacement of the pre-novice and novice competitions at the 2021 Skate Canada Challenge.

This report by The Canadian Press was first published January 11, 2021.