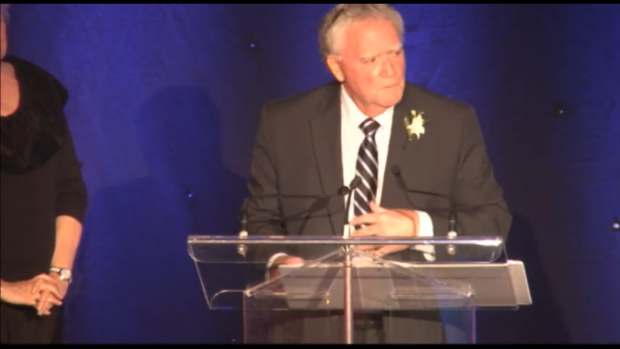 After Skate Canada removed coach Kerry Leitch from its Hall of Fame in July 2021 following a complaint about his conduct, the organization refused a request to advise the public about the decision.

Instead, Skate Canada simply deleted a page on its website celebrating Leitch’s career.

The organization’s refusal to make its decision public stands in sharp contrast to how it handled Leitch’s induction in 2014, when Skate Canada issued a press release celebrating Leitch and honoured him at a gala event, a video of which is still posted on Skate Canada's YouTube page.

“We see this all the time with sports organizations. When there is scandal, they try to avoid public disclosure that shows the problems with the sport,” Rob Koehler, director general of Global Athlete, a Montreal-based lobbying group for athletes, said in an interview.

“If you have a coach who you have decided to remove from your Hall of Fame, you have to announce that publicly so it sends a strong message to everyone about what is not acceptable behaviour and how you will be held accountable.”

Leitch is the former president of the Preston (Ontario) Figure Skating Club and has coached 23 Canadian champions. His students have included Olympians Melinda Kunhegyi, Lyndon Johnston and Lloyd Eisler.

Skate Canada agreed to remove him from its Hall of Fame following a March 9, 2021, Safe Sport complaint about the 81-year-old, who has admitted slapping a former skating student in the face in 1998. Safe Sport is a term used by sport organizations in reference to having appropriate policies and procedures to prevent and address allegations of abuse.

“The complaint raised concerns that Mr. Leitch’s prior conduct, which was the subject of a criminal charge in 1998, is not aligned with the current requirements of Skate Canada’s National Safe Sport Program and expected standards of conduct,” Skate Canada chief executive Debra Armstrong wrote in a July 28, 2021, letter to the complainant.

The complainant, a former competitive skater who provided TSN with their correspondence with Skate Canada and who requested anonymity, also asked that Leitch’s ouster be announced publicly.

“It is not currently Skate Canada’s practice to issue a press release when there is a change in status for an individual in the Hall of Fame,” Armstrong wrote the complainant in an Aug. 4, 2021, email. “As such, Skate Canada will not be issuing a release in respect of that decision.”

The same complainant also asked Skate Canada on Dec. 1, 2021, to remove coach Richard Gauthier and former skater and coach Eisler from the Hall of Fame.

While Skate Canada does not have a brick-and-mortar Hall of Fame, the organization says that its archives at its national office in Ottawa are home to thousands of photos, videotapes, trophies and other memorabilia.

Skate Canada's handling of the complaints offers a glimpse of the challenges faced by sports organizations in using current social norms to assess historical complaints. Even so, Koehler said there is no excuse for Skate Canada not being fully transparent about its decisions.

Leitch was charged with assault by Waterloo Regional Police in 1998 after he slapped a 15-year-old skater across the face. The incident was sparked by an altercation between the skater and his female partner at an event several weeks earlier, Leitch said in an interview with TSN on Wednesday.

Leitch received an absolute discharge and does not have a criminal conviction on his record.

“Cancel culture seems to be rampant,” Leitch said. “I was surprised when Skate Canada contacted me. I was given an opportunity to argue why I should not be removed from the Hall of Fame. But the confusing thing is that they knew all about this incident when I was inducted into the Hall of Fame in 2014."

Leitch said he was disappointed with Skate Canada’s decision.

“I was guilty in that incident,” Leitch said. “I admitted to police that I slapped that boy across the face and I wasn’t going to lie. I’m not a dishonest person. This kid had thrown his partner, who was 10 or 11 at the time, to the ice during a practice session, swore at her, and later slammed her against a wall. I grew up in an era when there were real consequences for actions like that. The principal at school had the strap and if you deserved it, your mother might also slap you across the face. When I was young, I was hit by both of my skating coaches, both of whom are in the Hall of Fame, and I deserved what I got. I guess things have changed.”

Eisler was suspended from coaching in Canada for the 2006-07 season because the then-43-year-old allegedly sent emails to a 15-year-old girl he was coaching that were deemed inappropriate by Skate Canada, The Globe and Mail reported at the time.

Eisler, who won two Olympic medals and a world championship with his partner Isabelle Brasseur, moved to California to continue his coaching career.

In an Apr. 13, 2022, email to the complainant, Armstrong wrote that Eisler would not be removed from the Hall of Fame.

“After careful deliberation and due consideration of the evidence available in this matter, the Skate Canada board of directors has made the decision to not remove Mr. Eisler’s name from the Skate Canada Hall of Fame,” Armstrong wrote.

Gauthier, who coached several world class pairs skating teams, was charged in October 2020 in Quebec with gross indecency, sexual assault and indecent assault against a skater he trained in the early 1980s in Montreal.

While Gauthier has admitted to showering with his alleged victim, and sleeping naked next to him, Gauthier has denied that he has done anything sexual. His trial has been adjourned until May 27, crown attorney Amelie Rivard told TSN in an email.

The complainant said that while Skate Canada has suspended Gauthier from coaching, the organization won’t remove him from the Hall of Fame until his criminal charges are resolved.

“At the very least, someone at Skate Canada should have cared enough to look at Gauthier’s HOF bio on the Skate Canada website,” the complainant wrote in a Dec. 17, 2021, email to Armstrong.

“Someone should have had the compassion and awareness to edit out [from Skate Canada’s website] that Gauthier has ‘the golden touch’ after he was placed on Skate Canada’s ‘under-investigation’ list for alleged being a sex offender. It is insulting and hurtful to any alleged victims, and other sexual abuse survivors, that he is still in the Hall of Fame and that Skate Canada is still lauding his successes.”