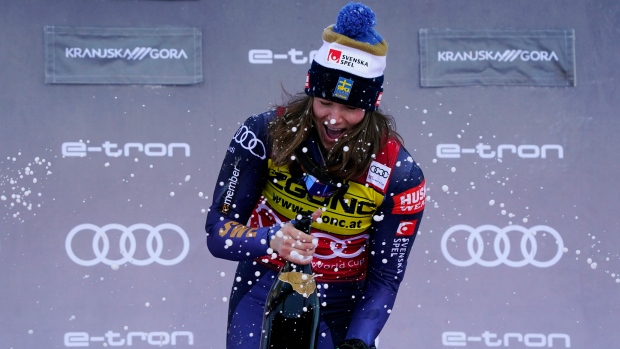 KRANJSKA GORA, Slovenia (AP) — Swedish skier Sara Hector waited seven years for another win since her maiden World Cup giant slalom triumph in December 2014. Now, she has won two more races within 10 days and been on the podium in each of the last four events.

To top it off, she overtook Olympic champion Mikaela Shiffrin on top of the discipline standings on Saturday.

“I am just in shock, it feels so awesome,” Hector said after her third career win.

Hector posted the fastest time in both runs on a demanding course mainly used on the men's World Cup. She extended her narrow first-run lead to a huge .96 seconds over the runner-up, former French world champion Tessa Worley.

"Really good day,” said Grenier. "I’m really happy with my skiing considering everything. Conditions are really tough and it’s a long hill so it’s not easy. I fought through to the end and I’m happy with the results.”

Shiffrin improved from 14th after the opening run to seventh, 2.05 seconds behind Hector, who now leads the American by 46 points in the GS season standings.

“It’s really unbelievable. I felt really good but then you never know. I felt, like, maybe I am too round because it was feeling easy,” said Hector, who became the first Swedish skier since Jessica Lindell-Vikarby eight seasons ago to top the GS standings.

Lindell-Vikarby won GS bronze at the 2015 world championships in Beaver Creek, Colorado, and was the top-ranked GS racer near the end of the 2013-14 World Cup season. She was ultimately passed by Anna Veith, the two-time overall champion from Austria who was competing under her maiden name Fenninger at that time.

“Jessica has been a big inspiration for me during all of those years," Hector said. "Thinking about that she made it later on ... not like at the age of Mikaela, like super young breaking through.”

Hector said her years on the Swedish team with Lindell-Vikarby, who retired at age of 31 in the summer of 2015, have helped her.

“It’s been good to have somebody to look up to when you are having a hard time and facing challenges,” Hector said. “If you work hard and with a good goal, all of a sudden it can turn around and go better.”

Fortunes have certainly turned around for Hector at a good moment, with the Olympic giant slalom just 30 days away. The Feb. 7 race opens the women's Alpine skiing schedule in Beijing.

Shiffrin had won the first two giant slaloms this season and was runner-up to Hector in the third but had to sit out the next GS in Austria last week following a positive COVID-19 test.

The American stretched her lead in the overall World Cup standings to 135 points from Petra Vlhova, who finished 15th.

Some more pre-race favorites struggled on the challenging Podkoren course, which is an annual stop on the men’s circuit.

World champion Lara Gut-Behrami, who was racing for the first time in nearly four weeks following a coronavirus infection, was only 17th after the opening run but improved to fifth.

No spectators were allowed at the race, which had been moved from another Slovenian resort, Maribor, because of a lack snow. A slalom on the same slope is scheduled for Sunday.