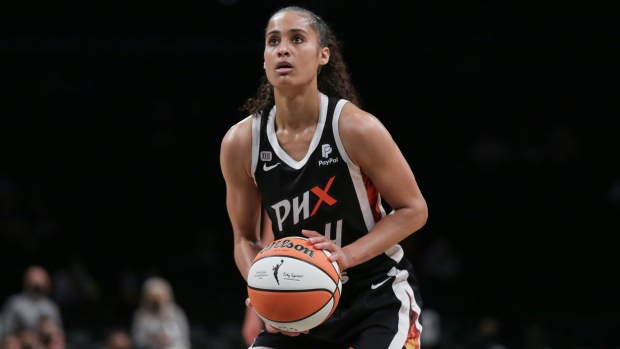 NEW YORK -- — Skylar Diggins-Smith has been on a tear since helping the U.S. win the gold medal at the Olympics.

Diggins-Smith is shooting 58% from the field and has made 13 of her 21 3-point attempts in the six games — all wins — since returning from the Tokyo Games.

"I got back excited to be with my teammates," said Diggins-Smith, who has scored 25 or more points in her last three games. "It had a fire lit under me winning a gold medal."

Phoenix was missing star center Brittney Griner, who sprained her left ankle with just over a minute left Wednesday night in the Mercury's victory over the Liberty to open the two-game set. Coach Sandy Brondello said before the game that she wasn't too concerned and that Griner should be back soon.

"We knew that missing 20 and 10 on the inside we had to do a little bit more," Diggins-Smith said. "I thought my teammates did a good job of setting me up."

Kia Vaughn replaced Griner in the starting lineup and had nine points and 11 rebounds for the Mercury (15-10), who have won six straight. Canadian Kia Nurse had six points in 18 minutes of action.

New York trailed by 19 points in the second quarter before rallying to take a brief lead in the third quarter.

With the game tied at 50 late in the third, Diggins-Smith had consecutive three-point plays to give the Mercury a six-point lead. Taurasi added a 3-pointer to start the fourth and New York never recovered.

"(Skylar's) been shooting the ball so well since the Olympic break" Brondello said. "She's a hard guard for them. That's what we needed tonight. We put the ball in her hands, making good decisions. It's nice to get the win and get on the plane ride and go home."

Natasha Howard led New York (11-16) with 18 points. Sabrina Ionescu finished with 12 points, 10 rebounds and nine assists. She was an assist short of joining Sheryl Swoopes as the only players in league history to have two triple-doubles in their careers.

"We need to come back together and sort it out," said Rebecca Allen, who had eight points and eight rebounds.. "It's about us growing from each game. I believe this game we did make some adjustments from the last one. Did we make enough? No."

The Liberty raised the three Eastern Conference championships banners from 1999, 2000 and 2002. They brought back former players Sue Wicks, Kym Hampton, Teresa Weatherspoon and Tamika Whitmore to celebrate the occasion as well as former mascot Maddie.

Liberty: At Minnesota on Tuesday to begin a three-game trip.