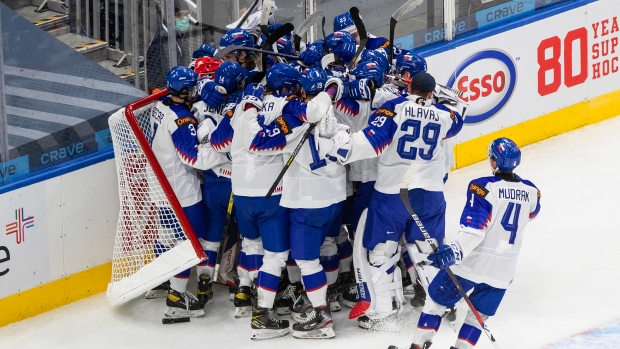 EDMONTON — Vasili Ponomaryov scored twice for the Russians as they defeated the Americans 5-3 in their tournament opening game at the world junior hockey championship.

After both teams scored in the first period, the Russians scored three goals and ended the second with a 4-1 lead. The scoreline would lead to the Americans pulling goaltender Spencer Knight.

Knight, a first-round pick of the Florida Panthers in 2019, allowed four goals on 12 shots before making way for Dustin Wolf before period's end.

The Americans attempted a comeback in the third period with goals from John Farinacci and Trevor Zegras to bring to deficit to one goal.

But an empty net goal from Yegor Chinakhov with 21 seconds to play put the game out of reach for the Americans.

The Americans will play Saturday against Austria, while the Russians will return to action Sunday evening against the Czech Republic.

Roman Faith scored late in the third period as Slovakia beat Switzerland 1-0 in the opening game of the world junior hockey championship on Friday.

Slovakia goaltender Simon Latkoczy registered the shutout, recording 28 saves. He made a highlight-reel glove save on Inaki Baragano on a Swiss power play late in the third period at Rogers Place.

Faith scored at 14:17 of the third, banging a loose puck from the slot past Thibault Fatton.

Slovakia and Switzerland lost in quarterfinal action last year. Switzerland fell to Russia and Slovakia dropped a game against Canada.

Both teams will play their next games Sunday. The Swiss will play Finland while Slovakia will play Canada.

Ottawa Senators prospect Tim Stuetztle scored a goal and an assist for the Germans, but they fell short against Anton Lundell and the Finns as they lost 5-3.

The Germans were without nine players due to COVID-19 protocols. Three of their players will be in quarantine until Dec. 27, while five others will be quarantined until the 29th.

An additional German player tested positive yesterday and must be in quarantine until Jan. 4.

Germany will play Team Canada Saturday, while Finland will play Switzerland on Sunday.

This report by The Canadian Press was first published Dec. 25, 2020.