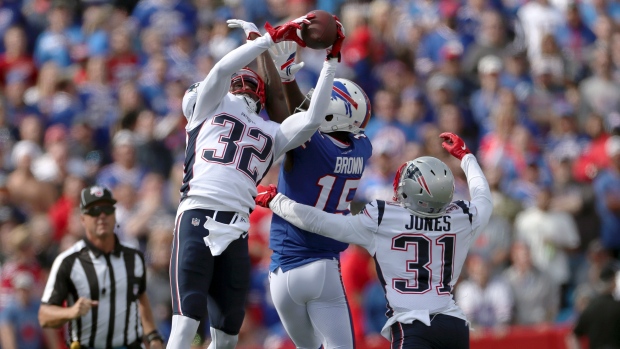 FOXBOROUGH, Mass. — The dominance of the Patriots' defence was at the centre of each of their eight consecutive victories to open the season.

Its knack for forcing turnovers, limiting opponents' rushing yards and ability to force three-and-outs helped it demoralize opposing offences on a weekly basis.

It did show some vulnerability during New England's lone loss of the season to the Ravens in Week 9. But the Patriots (8-1) still boast one of the NFL's best defensive units as they prepare for the second half of the season.

With no defensive co-ordinator and coach Bill Belichick calling the plays, a veteran group of self-proclaimed "Boogeymen" linebackers and ball-hawking secondary lead a defence that is allowing a league-low 11 points per game and has forced an NFL-best 27 turnovers.

But after facing a mostly soft schedule over its first nine games (opponents were a combined 21-43), New England will return from its bye staring at its toughest four-game stretch of the season. Those opponents — Philadelphia, Dallas, Houston and Kansas City — have a combined 22-13 record.

It's a challenge New England's defence says it's ready to confront.

"We can't think we're going to fix every problem we've had during the season, during the bye week; it just doesn't work like that. I think if it did, you'd see a lot of better football teams," safety and captain Devin McCourty said. "It's not the first game we've ever lost."

Nor is it the first time the Patriots' defence has dealt with criticism in recent years.

It spent most of the 2018 season trying to prove that the departure of defensive co-ordinator Matt Patricia wouldn't prevent it from developing into a championship-calibre unit.

Following a slow start, it did just that under Brian Flores, who helped it become one of the league's stingiest defences by the end of the regular season. It went on to shut down the Rams in the Super Bowl to help secure New England's sixth Lombardi Trophy.

But Schiano asked to leave the job for family reasons after just two months. Instead of finding a replacement, Belichick decided to take over play calling for the defence himself.

He also brought in former Patriots linebacker Jerod Mayo to coach the inside linebackers.

"It's his defence," Harmon said. "He's ran this defence for a long time. So he's always had input. I've had different defensive co-ordinators since I've been here, so we're kind of used to dealing with change."

And adapting to it.

While Belichick hasn't altered much about the defence's alignment over the past three seasons, he has tweaked it this season.

The Patriots still play a higher percentage of man-coverage sets than any other team in the league and the zero-blitz — or not using a deep safety to protect the back half of the field — is still one of its hallmarks.

But New England has switched from a base 3-4 alignment to a 4-3.

That's helped linebackers Jamie Collins, Dont'a Hightower and Kyle Van Noy move more freely in the middle of the field and created more opportunities for them as run stoppers.

Another byproduct has been the creation of an overall atmosphere for forcing turnovers, which has become the Patriots' calling card. There is now an expectation among members of the defence to "hunt the football," McCourty said.

Meanwhile, the secondary has excelled on the back half on the field, benefiting from the pressure the front seven is getting on quarterbacks to capitalize on errant passes. New England's defensive backs have been responsible for 13 interceptions.

The result has been opponents having to alter their game plans.

Browns receiver Odell Beckham Jr. said they went into their matchup against the Patriots with an aggressive plan to take shots down the field in the passing game. It didn't happen.

"I just felt like we didn't challenge as much as we could have," Beckham said. "I think we kind of shied away from it."

Among the factors that likely contributed were Cleveland's three consecutive turnovers in the first quarter that put the Browns in a 17-0 hole.

Hightower said turnovers are a carrot they chase each week in their attempt to shut down opposing offences.