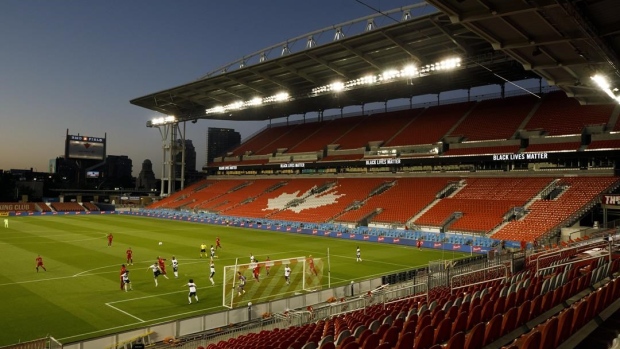 TORONTO — Some Toronto FC players got the green light Monday to resume training after an outbreak of COVID-19 that sent players and staff home to self-isolate.

There were nine positive tests in the TFC camp, according to figures released Friday by the city of Toronto. The MLS team had not trained since March 3, closing its north Toronto training centre and sending players and staff home

Toronto has been working with Toronto Public Health on a return-to-training protocol.

"As of (Monday) some members of TFC are permitted to engage in individual training and condition," the club said in a statement.

The self-isolation period can differ from person to person, it added.

TFC hopes to leave for Florida next week to get in some pre-season scrimmages ahead of the Scotiabank CONCACAF Champions League round-of-16 tie against Club Leon.

The first leg is April 7 in Mexico. The return leg will be played April 14 at Osceola Heritage Park in Kissimmee, Fla., where Orlando City's USL team used to play.

Toronto, which finished out last season playing out of East Hartford, Conn., has chosen Orlando as its U.S. base for the start of the 2021 campaign. The hope is pandemic-related border restrictions will ease at some point and the team can return to BMO Field, which only hosted four league games last season.

TFC opens the regular season April 17 against CF Montreal at Inter Miami CF Stadium in Fort Lauderdale, where Montreal will be based. Toronto's "home'' opener will be April 24 against the Vancouver Whitecaps at Orlando's Exploria Stadium. The Whitecaps will be based out of Sandy, Utah, to start the season.

Friday marked the one-year anniversary of TFC cancelling training to await word from the MLS after the NBA suspended its season due to the growing COVID-19 outbreak.

This report by The Canadian Press was first published March 15, 2021