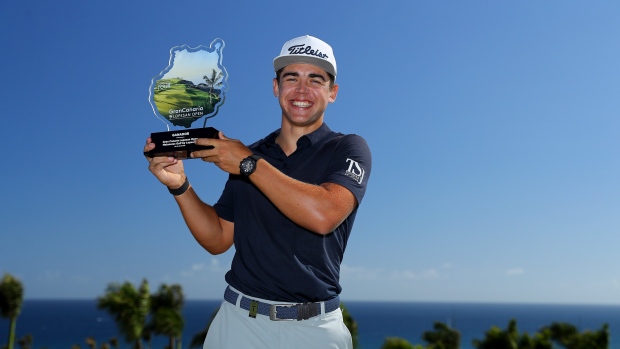 The 21-year-old Higgo shot a 7-under 63 for the second consecutive day to hold off a charge by Maximilian Kieffer, who finished second after an 8-under 62 that included seven birdies and an eagle.

This time, Higgo had a special reason to listen to nine-time major champion Player.

“I spoke to Gary last night actually and he just said there is no such thing as a lead and you should play like you’re two behind,” Higgo said. “That was nice from him. He’s said it to me so many times but I’ve never really had a lead so I’ve never had to worry about that.”

The overnight leader by two shots, Higgo had five birdies and an eagle in his final round at the Meloneras Golf Course in the Canary Islands, ending the tournament at 25 under. His other European Tour win came last season at the Portugal Open.

“It’s unreal,” Higgo said. “I can’t put it into words, it feels amazing. It’s quite a relief finishing now. It wasn’t over until the last hole really, I knew anything could happen, especially with the wind coming up. It was a bit stressful.”

The lefty was playing in his 24th event.

“I am just going to keep going forward," he said. “I am playing next week, the week after and see where my game goes. It feels good, I have worked really hard with my coach and everyone back at home, so it feels amazing.”

Kieffer was coming off a loss in the fifth playoff hole at the Austrian Open.