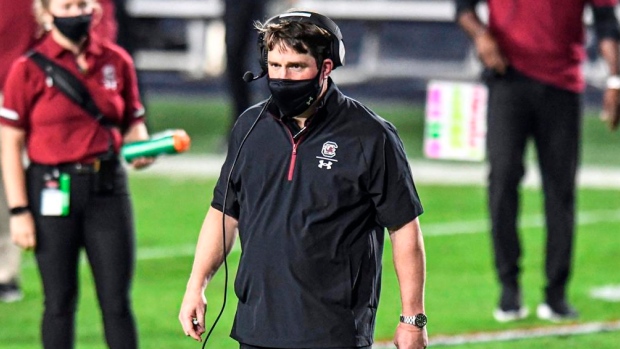 Will Muschamp , The Canadian Press

The school said in a release that Muschamp has been “relieved” of his duties with the football program. Athletic director Ray Tanner said first-year offensive co-ordinator Mike Bobo, a former head coach at Colorado State, will take over as interim coach.

The 49-year-old Muschamp had four years remaining on his contract. His buyout from the school is $13.2 million.

The Gamecocks are 2-5 and lost their third straight game, 59-42, at Ole Miss on Saturday night. It was a particularly glaring defensive effort for Muschamp, a national championship defensive co-ordinator at LSU in 2003, to watch his team give up 1,779 yards and 159 points in those three defeats.

“It's concerning,” Muschamp said after the Rebels amassed 708 yards of offence. “There is no doubt about that.”

Tanner said he did a thorough assessment of the football program and decided it was time for a change.

“I appreciate all that Will Muschamp has done for our program and wish him and his family the best moving forward," Tanner said in a statement. "I believe our program will be well served by Coach Bobo as the interim head coach as we search for a new leader for Gamecock Football.”

Muschamp was head coach at Florida from 2011-14 and was fired in November of his final season after an overtime loss to South Carolina.

Muschamp's stays with the Gators and Gamecocks were eerily similar. He led Florida to a BCS bowl and an 11-2 mark his second year there before going 10-13 before his dismissal there.

At South Carolina, Muschamp became the first coach to reach bowl games in his first three seasons and went 9-4 in his second season. But the Gamecocks fell to 7-6, 4-8 and 2-5 since. He was 17-22 against Southeastern Conference competition at South Carolina.

Things have gotten particularly bad the past two years. South Carolina pulled off a stunning 20-17 overtime victory at then-third-ranked Georgia in 2019. But the team has lost 11 of its 14 games since.

Tanner and school president Robert Caslen met with the football players and staff to tell them of the change.

Caslen called Muschamp a “true professional” who helped players succeed in the classroom and in the community. “However, I believe it is time to move in a different direction,” he said.

Caslen said the search for a new coach would start immediately and that Tanner, who had come under fire by some South Carolina supporters as the football team struggled, would be the one to find Muschamp's replacement.

Bobo was let go at Colorado State after five seasons in 2019. Muschamp brought him in to spark up an offence that was near the bottom of the SEC.

Now, Bobo will have to help the Gamecocks regroup with three games remaining in their all-SEC schedule.

South Carolina has two home games upcoming against Missouri on Saturday and No. 13 Georgia on Nov. 28. The regular-season concludes Dec. 5 at Kentucky.