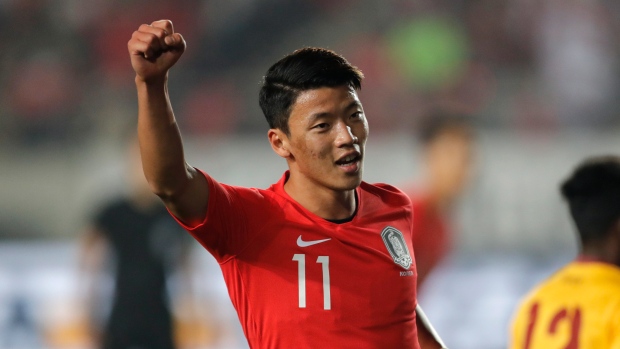 Kim, a Shanghai Shenhua striker, netted twice in each half while both of Son's goals came before the break, including a 45th-minute penalty. Hwang Hee-chan and Kwon Chang-hoon also scored for South Korea, which is seeking a 10th successive World Cup appearance.

It was South Korea's second straight win in qualifying, putting it top of Group H, ahead of North Korea on goal difference.

In Tehran, thousands of Iranian women watched the national team beat Cambodia 14-0 in the first soccer match they've been allowed to freely attend in decades.

The match marked a decades-long push by Iranian women to be able to watch soccer matches, something hard-liners in Iran's Shiite theocracy to this day still oppose.

China, trying to qualify for a second World Cup, won 7-0 against Guam while Japan defeated Mongolia 6-0 in Saitama to go top of Group F.

Earlier, Australia thrashed Nepal 5-0 in Canberra to keep its campaign for a fifth successive appearance on the global stage on track.

Only the top team from the eight groups and the four best second-place finishers progress to the next stage.