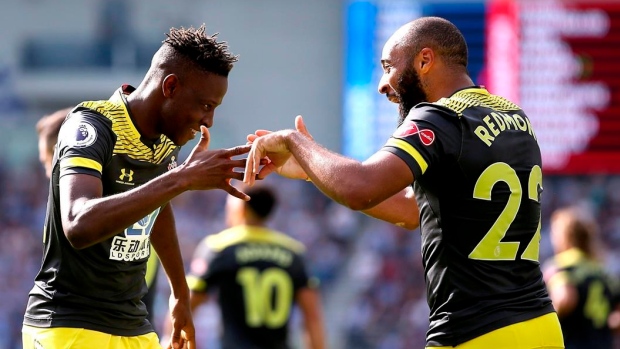 BRIGHTON, England — Moussa Djenepo's stunning first Premier League goal set Southampton on course for its first points of the season with a 2-0 win at 10-man Brighton on Saturday.

Djenepo, signed from Standard Liege in the off-season, had only been on the field for 78 seconds as a substitute when he cut in from the left to bury the ball into the top-right corner from the edge of the box in the 55th minute.

Nathan Redmond tapped home a cross from Sofiane Boufal to seal the points in injury time.

Brighton played a man light for an hour after striker Florin Andone was sent off for a reckless tackle on Yan Valery, while Lewis Dunk had a first-half header ruled out by the video assistant referee.

Prior to Redmond's strike, Brighton pushed hard for an equalizer and struck the woodwork through substitute Jurgen Locadia before falling to a first defeat under new manager Graham Potter.

Southampton had lost to Burnley and Liverpool this season.