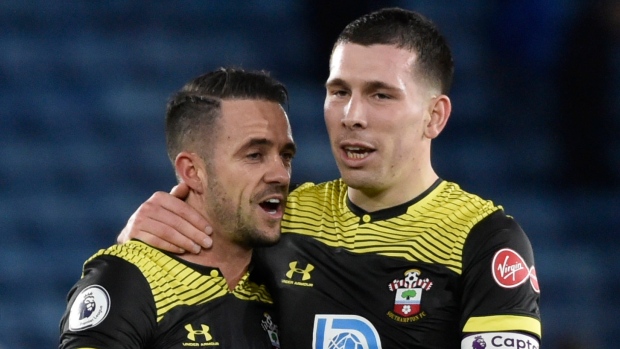 LEICESTER, England — Southampton gained a measure of revenge after its 9-0 thrashing by Leicester in October by winning the return match 2-1 in the English Premier League on Saturday.

Danny Ings grabbed the winner in the 81st minute for his 14th goal of an impressive season for the striker.

Leicester took the lead through Dennis Praet in the 14th but conceded an equalizer five minutes later when Stuart Armstrong’s shot deflected in.

It was a far cry from the record top-flight home loss -- and record club defeat -- inflicted on Southampton by Leicester at St. Mary’s Stadium 2 1/2 months ago.

"We never spoke (of) revenge or something," manager Ralph Hasenhüttl said.

"We should be thankful for this result from this first game, and that's what I've always said to the players. But we wanted to show everybody watching us that we can do much better, and what this team has changed since then.

"We've changed everything -- the behaviour, how we play, how we create chances, the commitment, the belief in what we are doing ... we will never forget the result of the first game but the second part of the story was for us, and that was the target today.”

The 9-0 game identified Leicester as a real threat for a finish in the Champions League qualification positions, and Brendan Rodgers’ side remains in second place, though could get overtaken by Manchester City on Sunday when the champion visits Aston Villa.

Leicester has claimed just one point from the last three matches in front of its own fans and manager Brendan Rodgers refused to blame the team's hectic schedule, which included an English League Cup semifinal first leg against Aston Villa on Wednesday.

"I don't really want to use that because if we are going to succeed then we have to have that robustness, that strength to keep going and going," Rodgers said.

"The players have been brilliant up until this point, so it's a sore one today, but we will go away and they can recover a little bit now, physically and emotionally from the game. And like we've always done, any time we've had a defeat, we'll analyse it, the details, where we can be better, and we will look to improve and get three points in our next game. The clear week ahead will help us to do that.”

Fueled by Ings, who has scored in nine of his last 11 league appearances, Southampton has pulled eight points clear of the relegation zone and has five wins from its last six matches.

Ings also struck the crossbar twice against Leicester, both times in the first half.

Leicester had a late equalizing goal ruled out for offside after an intervention by the VAR.