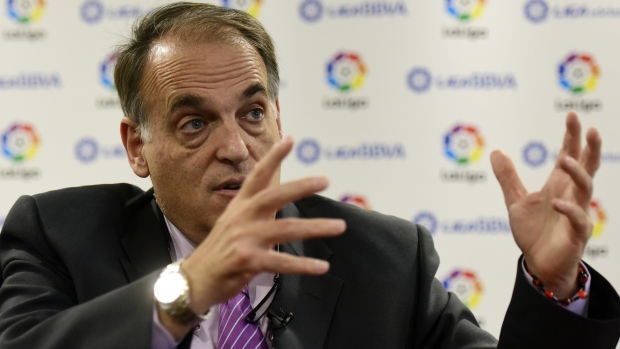 LONDON — FIFA’s determination to have a bigger role in club football worldwide is troubling the head of the Spanish league.

Javier Tebas, president of La Liga, fears FIFA expanding the Club World Cup and providing a fresh windfall for a group of elite clubs will exacerbate financial disparities between teams and harm football.

The FIFA men’s club competition is due to swell from an annual competition with seven entrants to an event featuring a 24-team group stage from 2021.

“The major risk would be the Club World Cup,” Tebas said through a translator in London. “They want to have it every two years. I don’t know how far they wish to go.”

FIFA President Gianni Infantino is considering offers from companies willing to provide financing for the competition, which is due to have a new name for its pilot edition. Tebas believes it could pose a greater challenge to European football than attempts by clubs to breakaway to form any Super League.

“FIFA … stopped being regulators and organizers for national teams and start to organise other kinds of tournaments which compete directly with the national leagues and this is something that concerns me because we had a balance, an ecosystem between the different leagues in Europe and different continents,” Tebas said.

“In Europe we have the Champions League and now we have an intruder who might disrupt that balance. There was already a threat of that in Europe, even though I think the risk of that has dropped significantly with the Champions League, but I think this could have an impact on the value of international competitions.”

Real Madrid President Florentino Pérez has formed the World Football Club Association, which has been formulating plans for new competitions of its own. Those proposals only emerged in reports after Pérez met with FIFA President Gianni Infantino in November.

Eight European teams are due to feature in the new Club World Cup, including Real Madrid due to its 2018 Champions League victory.

“The idea of creating new super World Cups for super clubs could be very damaging for Real Madrid and for major clubs,” Tebas said. “It’s something he’s not taking into account and I don’t really see a future for these competitions. I don’t think there’s a real passion for these kind of events. I think when people discuss this they realize it’s damaging for them.

“I always ask why we should change a system of strong international competitions… if it’s not broken, why try to fix it?”

But Infantino is determined to elevate the status of FIFA’s club competition and provide significant income to the finalists.

While concerned about Infantino’s plans, Tebas is supportive of UEFA President Aleksander Ceferin who has clashed regularly with his FIFA counterpart.

“If Ceferin defends European football as I have seen with national league and championships in balance, which is the current trend, I welcome this clash, this confrontation,” Tebas said. “An organisation like FIFA is supposed to be a regulatory body. They draft the different calendars and when we need to play. Sadly, from organising World Cups, they are talking about Club World Cups and having that every two years.

“That is not an option because it would change the status quo. This can't happen. This sort of confrontation will never harm us if it goes along the path Ceferin is trying to defend.”

Tebas has been a regular critic of governments using their wealth to finance clubs, particularly Qatar at Paris Saint-Germain and Abu Dhabi at Manchester City. Both teams have been punished by UEFA for breaching spending rules and City is subject to a fresh investigation that could lead to a Champions League ban.

“One of the major issues in European football is related to (financial) doping,” Tebas said. “Because when we have clubs being financed by states then that has an impact on salaries and that means in other countries with more strict economic controls like Spain and Germany clubs cannot actually ask the state for extra financing to pay those salaries.

“This causes inflation and people think about creating other competitions because Florentino Perez and other clubs are always saying we need more money to maintain our players.”

That isn’t necessary, according to Tebas.

“I don't think we are helping football in any way if we generate wealth and it just goes straight back to the big clubs,” Tebas said. “But that’s what’s happening, the major clubs share out the large part of the income among their players.

“In the end instead of having 12 Ferraris, they have 15. Instead of having 10 Lamborghinis they have 12. We're dealing with major clubs generating a huge amount of money. So our aim is to redistribute that wealth. It’s not a case of creating new competitions because anything there would only benefit large clubs and channel wealth to the major car manufacturers.”

One of Tebas’ frustrations closer to home is the Spanish football federation thwarting his bid to take La Liga games overseas. But the federation has just staged its reformatted Super Cup in Saudi Arabia despite criticism of the kingdom’s human rights violations and its role in the murder of The Washington Post columnist Jamal Khashoggi at the Saudi embassy in Istanbul in 2018.

Saudi Arabia has also been linked to the pirating of sports broadcasts from Qatar-owned beIN Sports to undermine its neighbour as part of a wider regional diplomatic dispute.

“The Saudi Arabian government has a policy whereby they improve the image of the government through sport — whitewashing their image,” Tebas said. “We should not forget what happened in the Turkish embassy.

"We should not forget these things. This happened in an embassy, not a pub and this is very serious, at least in my opinion. Money is not the only thing that matters.”