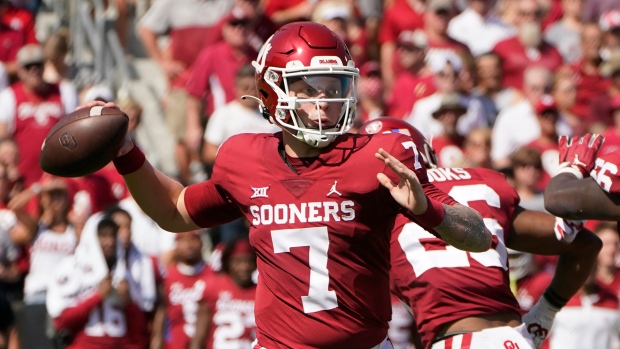 NORMAN, Okla. (AP) -- Spencer Rattler passed for a touchdown and ran for another, and No. 3 Oklahoma held on to beat Nebraska 23-16 on Saturday.

Celebrating the 50-year anniversary of the "Game of the Century" -- No. 1 Nebraska's 35-31 win over No. 2 Oklahoma in 1971, the teams rewarded their nostalgic fans with a competitive contest.

In the first meeting between the former conference rivals since 2010, Nebraska got the ball trailing by a touchdown with 57 seconds remaining and no timeouts. The Cornhuskers could not manage a first down.

Adrian Martinez passed for 289 yards and a touchdown for Nebraska (2-2), which was seeking its first win over a ranked team since 2015.

Oklahoma opened with an old-school 14-play, 75-yard drive. Rattler sneaked in from the 1 to give the Sooners a 7-0 lead.

Nebraska responded with a 14-play drive, but the Huskers were derailed by four penalties. Connor Culp's career-long 51-yard field goal put the Cornhuskers on the board.

In the third quarter, Oklahoma's Mario Williams caught a pitch and threw backwards to Rattler, who found Marvin Mims open for a 23-yard gain. The Sooners cashed in and took a 14-3 lead when Rattler found Jeremiah Hall in the end zone for a 1-yard touchdown pass.

Oklahoma quickly responded. Isaiah Coe blocked the extra point, and Pat Fields returned it 100 yards for two points. It was Oklahoma's first blocked extra point return for a 2-point conversion since Zack Sanchez ran one back against TCU in 2013.

Brooks scored on a 2-yard run early in the fourth quarter, and the extra point put the Sooners up 23-9.

Martinez completed a 55-yard pass to Zavier Betts, and a 15-yard unsportsmanlike conduct penalty against Oklahoma's sideline was tacked on to take the ball from the Nebraska 13 to the Oklahoma 17. Sooner cornerback D.J. Graham's spectacular leaping one-handed interception on fourth down snuffed out the threat.

Nebraska: The Cornhuskers fought valiantly and the defense put up another solid performance. Nebraska had allowed seven points to Fordham and three to Buffalo in its previous two games.

Oklahoma: The Sooners had another strong defensive effort a week after shutting out Western Carolina 76-0. Oklahoma held the Cornhuskers to 384 yards, and the Sooners found their way through non-conference play unbeaten.

Oklahoma likely won't lose much ground, even though the game was closer than three-touchown spread expected.