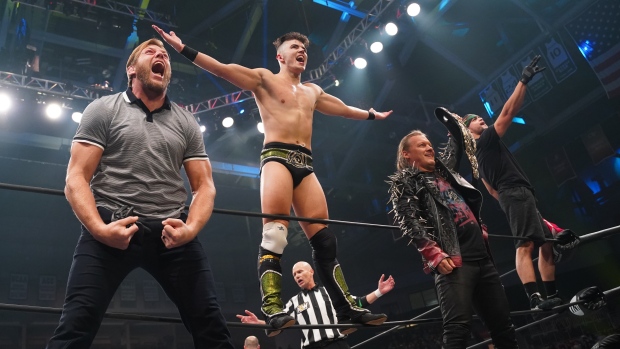 The Inner Circle is in action in two big matches on Wednesday night as Santana and Ortiz take on Best Friends in a parking lot fight, while Chris Jericho and Jake Hager face off against Private Party. You can catch AEW Dynamite on Wednesday at 8pm et/5pm pt on TSN2, the TSN app, streaming on TSN Direct and on TSN.ca.

Parking Lot Fight: Proud-N-Powerful (Santana and Ortiz) vs. Best Friends (Trent? and Chuck Taylor) - The weeks-long feud between these two teams finally comes to a head when Santana and Ortiz meet Trent? and Chuckie T. in a parking lot fight. Santana and Ortiz once again tried to get under Best Friends' skin on last week's Dynamite when they jumped Orange Cassidy after his match in yet another attack on Taylor and Trent?. We've already seen countless brawls between these four men and Santana and Ortiz even got family involved when they destroyed Sue Marasciulo's (Trent?'s mom) minivan with sledgehammers. Anything goes in this parking lot brawl, so will we see matters settled once and for all after Wednesday night?

Non-title match: AEW World Tag Team Champions FTR (Cash Wheeler and Dax Harwood) (w/ Tully Blanchard) vs. Jurassic Express (Luchasaurus and Jungle Boy w/ Marko Stunt): The new tag champs have already made it clear that they're not going to be just giving away title shots, so FTR has laid down a challenge for Luchasaurus and Jack Perry - beat them on Wednesday night and then you can challenge Harwood and Wheeler for the titles. But that could be easier said than done. FTR has stormed through AEW's tag division since their arrival in May and claimed the titles in their first opportunity, defeating Kenny Omega and "Hangman" Adam Page at the All Out pay-per-view. Wheeler and Harwood are still undefeated as a tag team in AEW, so it's going to take something special from Jurassic Express to pick up a win on Wednesday night.

Inner Circle ("The Demo God" Chris Jericho and Jake Hager) vs. Private Party (Marq Quen and Isiah Kassidy) (w/ Matt Hardy): After defeating the team of Joey Janela and Sonny Kiss on last week's edition of Dynamite, Chris Jericho put the AEW tag-team division on notice, letting them know that he and Jake Hager were coming for the titles. When you look at Jericho's tag-team resume from over the years, it would be foolish not to take his threat seriously and Private Party are the first team in the crosshairs. While still one of the younger teams in the division, Private Party have proven themselves capable of hanging with the best AEW has to offer with victories over the Young Bucks (Nick Jackson and Matt Jackson) and Santana and Ortiz. With tag-team icon Matt Hardy in their corner, Quen and Kassidy have big aspirations and a win over Jericho and Hager would go a long way to reasserting themselves in an increasingly competitive AEW tag-team division.

NWA World Women's Championship Match: Thunder Rosa (c) vs. Ivelisse: Thunder Rosa gave AEW Women's World Champion Hikaru Shida all she could handle at All Out and now returns to action on Dynamite to defend her NWA title against one half of the AEW Women's Tag Team Cup winners, Ivelisse. This will not be the first encounter between the two women, but the pair has not stepped into the ring together for some time and both Thunder Rosa and Ivelisse head into Wednesday's match with confidence. With the gold on the line, neither woman can afford to make a mistake. Will Ivelisse continue her winning run or will the champion once again prove why she's among the top women's wrestlers in the world?

"Hangman" Adam Page vs. Frankie Kazarian: Things aren't going well for the Hangman at the moment. After costing the Jacksons a shot at the tag titles, he got kicked out of the Elite and following his and Kenny Omega's tag-team title loss to FTR at All Out, the Best Bout Machine has made it clear that their team is also finished. While Page wants to make amends with his former stablemates, it appears any efforts will fall on deaf ears. Wednesday night's match marks Page's return to singles action for the first time in over two months and it's only fitting that it comes against another former AEW World Tag Team Champion in SoCal Uncensored's Frankie Kazarian. These two men are no strangers to one another and, while Kaz's stable is still going strong, a singles win for the SCU member will go a long way to prove that he's more than simply a tag-team specialist.

PLUS: Maxwell Jacob Friedman returns to action for the first time since failing to capture the AEW World Championship from Jon Moxley at All Out. We saw an enraged MJF blame his loss on Wardlow and threaten his job on last week's Dynamite, so it's pretty safe to assume that MJF's foul mood will continue into this Wednesday night. Can MJF get back on track or will his preoccupation with the defeat to Moxley make him susceptible to an upset?

- We will hear from both men set for the AEW World Championship match at Oct. 14's Dynamite Anniversary show as the champion Jon Moxley and the challenger "The Murderhawk Monster" Lance Archer will address their upcoming bout on Wednesday night. The prospect of a war of words between Moxley and Archer's advisor, Jake "The Snake" Roberts is an intriguing one and we might see the first battle between to the two on Dynamite. But what about Eddie Kingston? "The Mad King" made it clear on last week's Dynamite that he wasn't actually eliminated from the Casino Battle Royal at All Out in which Archer earned his title shot, so will Kingston make his presence known on Wednesday night, as well?

- "The Best Man" Miro made his surprise AEW debut on last week's Dynamite and he and "Superbad" Kip Sabian are set for another appearance on Wednesday night. Will we get some more information on the bachelor party Miro has planned for Sabian ahead of his wedding to Penelope Ford or maybe a wedding date has finally been nailed down?