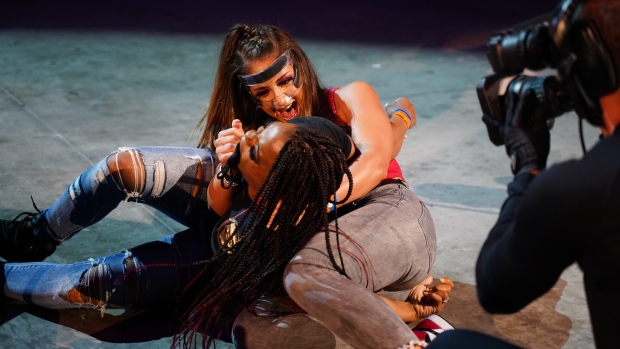 All Elite Wrestling’s All Out pay-per-view on Saturday night features a number of title matches and, in the main event, an AEW World Championship match between champion Jon Moxley and No. 1 contender Maxwell Jacob Friedman, but before that goes down, there is the Buy In.

Prior to the PPV, AEW presents a one-hour preshow on YouTube that will be headlined by a grudge match between Dr. Britt Baker DMD and Big Swole that has been weeks in the making. “The Tooth and Nail Match” will take place in a dentist’s office, much like the one Baker uses in her real-life practice. Though the feud between the two women has been one of the longer simmering conflicts in AEW, president Tony Khan says there’s no need to read anything into the match being put on the Buy In and not the pay-per-view proper.

“From the first pay-per-view we did to [February’s] Double or Nothing, we’ve put some of our biggest stars, including “Hangman” (Adam Page) and MJF on the Buy In,” Khan said in a conference call on Thursday. “The reason why it’s called the ‘Buy In’ is because we try to put exciting stuff on this first hour of the show so that people will pay to see the whole show. I love wrestling fans and I’ve often said that wrestling is my favourite economy…it’s the only place in the world where you will have people complaining about getting something for free that they don’t have to pay $50 for and I think that’s great.”

Khan believes that while Baker and Swole could put on a fine traditional match, Baker isn’t completely recovered from the knee injury she incurred in late May and the cinematic nature of the Tooth and Nail Match will stand out from the card’s other bouts

So what can fans expect from this match?

"It will be Falls Count Anywhere, and they will be fighting in and around a dentist's office,” Khan said. “I understand Britt's office, in fact, will be set up, and I think it's going to be a real house of horrors for Big Swole, but she knows what she signed up for. It will be a great match. It'll be a lot of fun and I'm really excited, and it'll be a great return to the ring for Britt. We've seen her claiming she was going to participate in matches, but I don't think in that handicap match [on the Aug. 26 edition of Dynamite], she really did anything. And I think now it's time to finally to see Britt back in the action. I'm excited."

The match will be the first of two women’s singles matches on the evening with a title match to come later in the card when AEW Women’s World Champion Hikaru Shida stakes her belt up against National Wrestling Alliance World Women’s Champion Thunder Rosa.

Khan says the interpromotional match came about thanks to his relationship with NWA owner (and Smashing Pumpkins frontman) Billy Corgan.

“The NWA has a lot of great history, but they’re not really operating right now,” Khan explained. “I think we’re very, very different companies at a very different place. It sounds like the NWA is going to be getting back to running and I wish Billy the best in what he’s doing. I thought this would be a good opportunity for them and for us because Thunder Rosa is great and I thought she would be a great challenger for Shida. So it’s one of those situations where I thought it would make sense for both sides, which is why I proposed it and he agreed, so that’s why we’re doing it.”

While Khan wouldn’t commit to any future cooperation between the two organizations, he’s not ruling out working together again down the road.

“I’m not sure what the future will hold for us, but obviously if Thunder Rosa wins the title, there could be a lot more,” Khan said. “Thunder Rosa and Shida is going to be one of the great matches on the card.”

Thunder Rosa was not the only wrestler not currently under an AEW contract that Khan addressed on Thursday.

The idea of seeing Brock Lesnar in an All Elite Wrestling ring is a tantalizing possibility for wrestling fans, but AEW Khan wouldn’t entertain the idea just yet. The former World Wrestling Entertainment and Ultimate Fighting Championship Heavyweight Champion is currently a free agent with his latest WWE contract having expired this past spring. Lesnar is believed to be interested in continuing his in-ring career, perhaps in both wrestling and mixed martial arts, and the rumour mill has been rife with talk of his options.

“I can’t comment on that at this time, but I’ve enjoyed Brock’s work for many years,” Khan said. “He’s a great fighter and a great wrestler. I don’t think people talk enough about what a great worker Brock Lesnar is. He’s one of the greatest working big men I’ve ever seen, one of the great athletes in the history of the wrestling business and I have so much respect for him.”

If Lesnar is intent on making the jump to AEW, Saturday night’s All Out PPV will give him a pretty good idea of what he can expect.

All Elite Wrestling’s Buy In airs at 7pm et/4pm pt on YouTube before the All Out pay-per-view that begins at 8pm et/5pm pt.