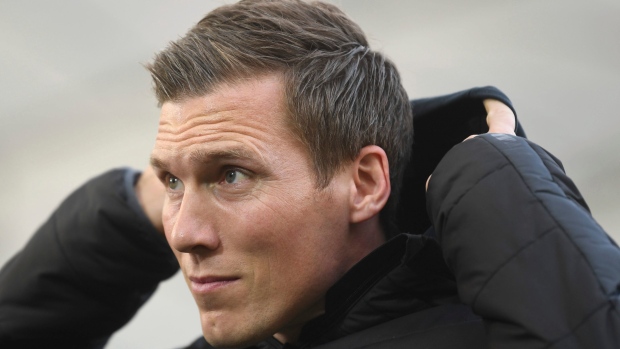 STUTTGART, Germany — Stuttgart is looking for another coach after parting company with Hannes Wolf on Sunday.

The Bundesliga team said the decision was made following discussions with Wolf that lasted well into the night after Stuttgart's 2-0 loss at home to Schalke on Saturday.

It was Stuttgart's seventh loss in eight games across all competitions and it left the side just three points above the relegation zone.

"We need a new impulse to get back onto a more successful track," Stuttgart sporting director Michael Reschke said. "None of us wanted to be in this situation and we would very much have liked to have continued working with Hannes, because he is an exceptional coach and a wonderful character."

The 36-year-old Wolf led Stuttgart to promotion as second division champion last season. He had been in charge since September 2016.

"Miguel (Moreira, the assistant coach) and I are very grateful for almost a year and a half of unbelievably intensive and mostly wonderful times," said Wolf, who wished the club "all the very best."

Stuttgart said a decision on a successor will be made "in the next few days."

Many Stuttgart fans feel the side was hasty with its decision and that Wolf deserved more time to turn the team's fortunes around. Some supporters defended the coach on Twitter and said the side's problems originated at boardroom level.