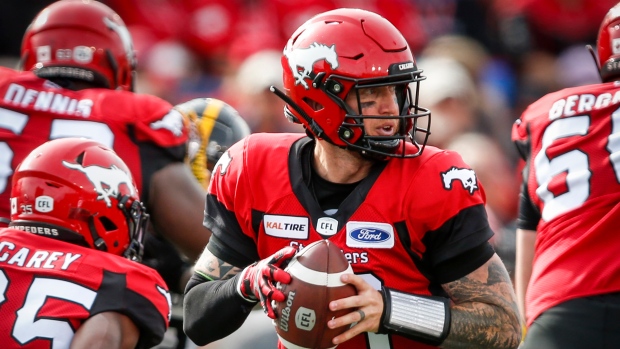 CALGARY — The Calgary Stampeders expect the Winnipeg Blue Bombers to put the ball in the hands of running back Andrew Harris a lot Saturday.

The Bombers' ground game is the bread and butter of their offence. Harris is the main man in it with a league-leading 1,261 yards.

Calgary excels at defending the run limiting yards to 4.6 per carry, so the force that asserts itself is the key to a game with major playoff implications in the CFL's West Division.

"Harris is a huge part of their offence in many different ways and he's elusive. He can not only run, he can receive in the backfield as well.

"He's good at breaking tackles. We've always emphasized 'run to the ball, run to the ball' and this week it's going to be even bigger.

"It might not be the first or the second. It might be the third guy in who makes the play we need."

Winnipeg (10-6), Calgary (10-5) and the Saskatchewan Roughriders (11-5) jockeying for first place in the West injects a playoff vibe into Saturday's meeting at McMahon Stadium because of its post-season ramifications.

In the event of a tie in the standings with Saskatchewan, the Stampeders would rank higher by virtue of taking the season series 2-0.

But a two-point loss to the Blue Bombers back on Aug. 8 — when Winnipeg's Matt Nichols and Calgary's Nick Arbuckle were starting quarterbacks — puts pressure on Calgary's quest for the division's top rung.

The Blue Bombers host the defending Grey Cup champions next Friday in the second game of the home-and-home before ending the regular season with a bye week.

"You want to be able to beat the best teams and do it the right way," Harris said. "I'm thinking about playing our best football at the end of the season and peaking at the right time and this is an opportunity for us to get there."

The Stampeders remain on the road to conclude the regular season against the Lions.

"To me, this is a team that's got two games left and they've got a bye week no matter what," Stampeders quarterback Bo Levi Mitchell said.

"They know they can come out here and physically hit you and they'll have a chance to rest before playoffs whether or not they get first. We've got to be ready to come out and answer that."

Calgary's front four and linebackers want to contain both Harris and quarterback Chris Streveler, who leads all CFL quarterbacks and ranks second in Blue Bomber rushing yards with 641.

Harris is coming off a season-high 166 rushing yards and also scored a touchdown in last week's win over the Montreal Alouettes.

"It's good to kind of get in a rhythm at this point in the season," Harris said.

Mitchell says he has a role in assisting Calgary's defence.

"Knowing that last game they had an awesome run game, we've got to do a great job on offence of holding onto the ball and making it tough on them to have those long drives," the quarterback explained.

Mitchell is 5-1 since returning from a shoulder injury that sidelined him for two months. Streveler is 3-4 since Nichols hurt his shoulder and underwent season-ending surgery.

"The plan is for Strev to go out there and win us a football game," O'Shea said.

THE JEFFERSON FACTOR — Mitchell means it as a compliment when he calls the six-foot-seven Bombers defensive end "a freak". Stampeders head coach Dave Dickenson wondered why the CFL's leader in forced fumbles and owner of 12 sacks was overlooked by the NFL.

FAST STARTING BOMBERS — Winnipeg leads the CFL in first-quarter points (127), which allows the Blue Bombers to settle into running the ball. An early Calgary lead forces Streveler into throwing downfield. His completion rate is 26.9 per cent completion rate and he's been intercepted five times attempting passes of 20-plus yards.

MINUS ROBERSON — Streveler might look downfield more in the absence of Stampeder star cornerback Tre Roberson (concussion) and his seven interceptions on the season.

AML GETS THE NOD — With American running backs Don Jackson, Ka'Deem Carey and Romar Morris all on the Stampeders' injured list, the next man up at starting tailback is Vancouver's Ante Milanovic-Litre. The 25-year-old Simon Fraser alum will split ball-carrying duties with return specialist Terry Williams.