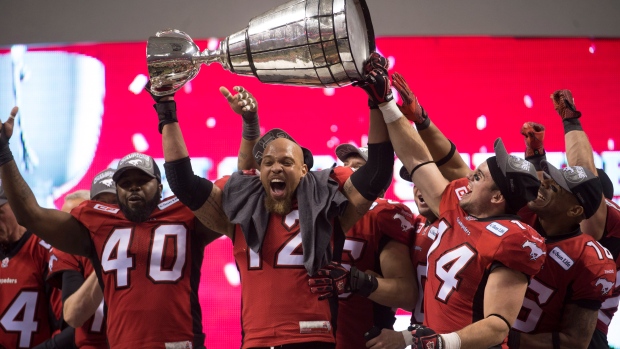 Mitchell threw for 334 yards as Calgary held on for a thrilling 20-16 win over the Hamilton Tiger-Cats at B.C. Place. The six-foot-two, 196-pound Texan was calm and precise on the field, completing 25-of-34 passes in his first career Grey Cup start. He was named the game's outstanding player.

At one point, Mitchell threw 10 straight completions, tying him for the third-longest streak in Grey Cup history before a boisterous B.C. Place Stadium gathering of 52,056 — 1,423 short of a sellout.

But the West Division champions needed two late defensive stands and some luck to secure the victory.

A Delvin Breaux interception of Mitchell put Hamilton at the Calgary 50-yard line. Quarterback Zach Collaros marched the offence to the three-yard line before the Stampeders' defence stiffened, resulting in Justin Medlock's 17-yard field goal at 9:25 of the fourth quarter to pull to within 20-13.

Hamilton regained possession at its 41-yard line with under four minutes remaining and marched to the Calgary 23. Cory Mace's sack stalled the drive and set up Medlock's 37-yard field goal to cut the Stampeders' lead to 20-16 with just over two minutes remaining.

Brandon Banks brought Ticats supporters to their feet with 35 seconds left when he returned a Rene Paredes punt 90 yards for a TD, but it was nullified by an illegal block penalty. Instead of having the lead, Hamilton took over at its 12-yard line.

Calgary earned its third straight win this season over Hamilton, which after a 1-6 start to the season rallied to a 9-9 mark to finish atop the East Division.

Paredes had to handle punting duties in the second half after incumbent Rob Maver suffered an abdominal injury after being hammered on a Hamilton punt return. The six-foot, 201-pound Maver was hit from the blindside by Justin Hickman, a six-foot-two, 265-pound defensive lineman, and remained on the field for some time before eventually walking off on his own.

Calgary also lost receiver Maurice Price to an ankle injury in the second half.

Hamilton's Grey Cup drought continues with their last CFL championship coming in Vancouver in '99 when they beat the Stampeders 32-21.

It's also the second straight Grey Cup loss for the Ticats, who lost 45-23 last year in Regina to the Saskatchewan Roughriders.

A blocked field goal by Calgary's Demonte Bolden loomed large in Calgary taking a 17-7 halftime lead. The burly defensive lineman, in his first game since breaking his leg in September, batted down Medlock's 26-yard try with the Stampeders leading 14-0.

The six-foot-five, 285-pound Bolden began his CFL career in Hamilton, playing two seasons there ('09-'10) before joining the Stampeders in 2012.

Mitchell countered by marching Calgary 87 yards on eight plays, setting up Paredes' 11-yard field goal at 12:43. But Collaros countered smartly, hitting Banks on a 45-yard TD pass at 13:39 to make it a 10-point game.

Mitchell was a one-man show in the first half, hitting 14-of-17 passes for 220 of Calgary's 232 net yards. Despite Hamilton's terrible start, Collaros completed 9-of-13 attempts for 155 yards and a TD, accounting most of the Ticats' 185 first-half offensive yards.

It was a dreadful opening quarter for Hamilton, which posted -12 yards rushing and just four net yards. Calgary had 120 net yards, thanks to Mitchell's 117 passing yards.

Tate's one-yard TD run 48 seconds into the second capped a 10-play, 66-yard drive and came after Hamilton's Brandon Stewart was called for pass interference in the end zone. Tate opened the scoring at 9:48 of the first with a one-yard touchdown that ended a five-play, 55-yard march.

NOTES — Receiver Joe West and offensive lineman Edwin Harrison didn't dress for Calgary. Linebacker Frederic Plesius and offensive lineman Marc Dile were Hamilton's scratches . . . Sunday's game was the first Grey Cup where coaches could challenge defensive pass interference. There were 55 challenges this season, with 17 resulting in overturn plays . . . Of the 43 Canadians who were on Hamilton's and Calgary's rosters last weekend, 84 per cent were original draft picks. Four more Stampeders were signed as undrafted free agents . . . The contest was extra special for one lucky person as the 50-50 draw exceeded $192,000.