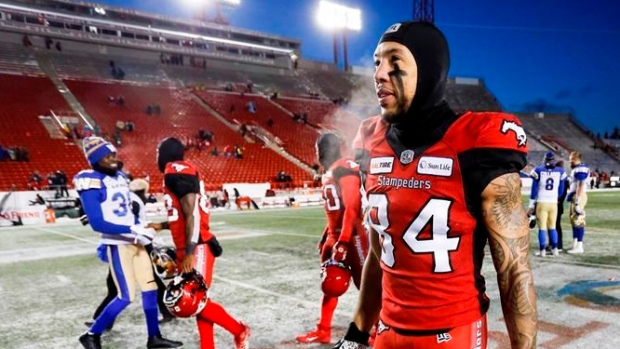 CALGARY — The Calgary Stampeders' season was short by their own standards.

After playing in five of the last seven Grey Cup games and winning two of them, their exit in the CFL's West Division semifinal Sunday at the hands of the Winnipeg Blue Bombers felt sudden.

Calgary fell short of a club-record eighth straight appearance in the division final.

So any satisfaction that could be drawn from a dozen wins to finish second in the division was overshadowed by the knowledge the team won't be in a position to achieve a rare feat — repeating as Grey Cup champions on their home turf in Calgary on Nov. 24.

"Feels very abrupt, but it's the reality of sports. Really no excuses. We didn't play a good enough game and we got beat."

Calgary was a victim of its 2018 success losing big name players on both sides of the ball to CFL free agency and the NFL.

Unlike previous seasons, the Stampeders didn't have the same depth to withstand the loss of players to injury.

Half of Calgary's 12 wins were by five points or less.

"We were really scratching, clawing and fighting for the last six to eight weeks to the point where everything was just so difficult," Dickenson said.

"I do think we ran out of gas. You could see in their faces they wanted to keep playing, they want to keep going, but everybody, it's been a tough year on us."

An offence that relied heavily on passing was minus star receiver and playoff performer Eric Rogers (high ankle sprain) in a 35-14 loss to the Bombers.

How much credit the Bomber defence deserves for halftime adjustments that held Calgary to zero points in the second half, and how much blame quarterback Bo Levi Mitchell should assume for not overcoming that is a matter of debate.

"I think you should take criticism when it comes to performances like that," Mitchell said. "It was literally the worst game of my entire career statistics-wise.

"Playoffs is where I've always stepped up and become a different player. With success comes failure. It's going to happen. Hopefully throughout a long career it doesn't happen very often."

Calgary managed to go 4-3 through July and August when Mitchell, the CFL's Most Outstanding Player in 2018, was sidelined with an injured pectoral muscle and Nick Arbuckle was under centre.

But the Stampeders arrived at the Labour Day game in the unusual position of looking up at three teams above them in the division standings.

Defensive back Brandon Smith, who will retire after 12 seasons and three Grey Cup wins with the Stampeders, is of the opinion Calgary overachieved in 2019.

"We scratched, clawed and fought for every point we gained this year," he said. "The standard we set here is Western Final, Grey Cup calibre teams. It's tough losing in the semis like we did.

"This is kind of an overachieving team because a lot of people didn't think we'd be where we were. We came away with 12 wins, which is huge for a young team like we had.

A silver lining for Calgary is Rogers' injury isn't the knee that had him considering retirement last off-season.

The owner of eight career playoff touchdowns on just 16 catches expects to recover from his ankle sprain in time to get quality prep in for 2020.

Receiver Kamar Jorden played his first game Sunday since a catastrophic knee injury midway through the 2018 season. He says he too will be ready to go for 2020.

Cornerback Tre Roberson, the team's interception leader, has another year remaining on his contract.

But Arbuckle will likely pursue a starting job somewhere. Receiver Reggie Begelton, who totalled 1,440 receiving yards and scored 10 touchdowns, may be NFL-bound.

The coach and several Stampeders said they'll participate in Grey Cup week festivities, but might not be at the game to watch an opposing team run out of their dressing room onto McMahon Stadium turf.

"I'm going to celebrate what I believe is a great sport in the CFL and the Grey Cup. I think our people here in Calgary should as well. We're not in the game. It's disappointing. It sucks. That's pro sports."