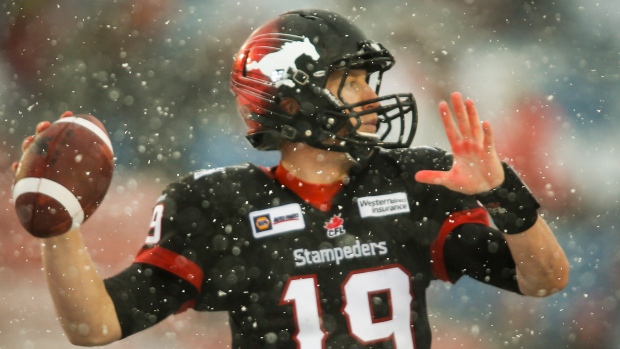 CALGARY - The Calgary Stampeders' regular-season record in seven seasons under head coach and general manager John Hufnagel is 88-37-1 for a winning percentage of almost 70.

They've posted the best record in the CFL or tied for it five times.

Calgary's playoff record to date is 5-5, which includes its Grey Cup victory in 2008.

Upset losses in the West Division final to the Saskatchewan Roughriders in 2010 and 2013 — when Calgary's records were 13-5 and 14-4 respectively — kept the Stampeders from backing up dominant regular seasons with a championship.

So after a 15-3 season matching a franchise record and on the eve of another division final, Stampeder running back Jon Cornish was asked Saturday what does the weight of expectations feel like?

"Let me just clarify," Cornish continued. "Expectation doesn't really exist. We can talk about it and people write it down and stuff, but it's not a real thing. Once you realize that, you can go into these games and not have any pressure.

"There's no pressure on me. Do I want to win, 100 per cent. But pressure doesn't exist. Nobody is pushing down on me. I think this team will come out understanding there is 'expectation' but we're going to play our game."

It's the Edmonton Eskimos this time who intend to play spoiler. Calgary swept Edmonton (12-6) in their three regular-season games. The Stampeders have to beat the Esks a fourth time to get to next week's Grey Cup in Vancouver.

"I definitely would disagree with them that it's their year," Eskimos quarterback Mike Reilly said. "I don't believe in the destiny of a team, or anything like that.

"In terms of potential, athletic ability and in terms of players, I don't think they're a far-and-away better team.

"I think we have the best team in the league. I believed that all season long. We've got to prove it though."

The victor faces the winner of Sunday's East Division final between the Hamilton Tiger-Cats and Montreal Alouettes, who both went 9-9 in the regular season.

Edmonton's last appearance and win in the CFL's championship game was in 2005. Calgary lost the Grey Cup to the host Toronto Argonauts in 2012.

Sunday's forecast is for mostly sunny skies and a high of minus-3. The Eskimos didn't score an offensive touchdown in last Sunday's semifinal, but eked out an 18-10 win over Saskatchewan at frigid Commonwealth Stadium.

Reilly didn't play until midway through the third quarter because of what's been reported as a broken bone in his foot. The Esks quarterback says he feels "night and day" more fit to play in Calgary.

"Things have progressed every day even with pushing the limits and things like that, we haven't taken any steps backwards," Reilly said. "Going into last week's game, there were definitely some questions marks in my mind about what I would be able to do.

"This week we've called all the plays that we have installed and I've run all of them and be able to do it physically at a very high level. There's not a play in our game plan that our coach could call that I'd have any hesitation about doing, so I feel very good about that."

Both Bo Levi Mitchell and Reilly will start in a CFL playoff game for the first time in their careers, although they have appeared in previous post-season games.

Reilly is a mobile quarterback with 709 yards rushing in 2013, but his injury could make him less effective on the run Sunday.

Both teams rely heavily on the run. Calgary topped the CFL in average rushing yards per game (143.9) ahead of Edmonton (129.4).

But Edmonton and Calgary also ranked second and third respectively in defending the rush. The Eskimos held the Roughriders to just 47 yards on 10 carries in the semifinal.

The Stampeders had a bye week's worth of rest and recovery while Edmonton and Saskatchewan prepared to square off.

Calgary is relatively healthy on offence with the return of Cornish and receiver Maurice Price, who both sat out the regular-season finale to follow concussion protocol.

"We're as healthy as we've been probably since the first week of the season," Mitchell said.

Bolden has practised the last two weeks, but did not make the 46-man game roster. Hughes, the CFL's defensive player of the year in 2013, is on the game roster, but was surprisingly candid on his compromised game fitness.

"I'm still in pain and I don't think the pain is going to change at all," Hughes said. "There's no say-so I'm still going to play. Even though my name is on the roster, they're making it a game-time decision.

"It's one of those situations where I don't know what they're going to do with me right now."

Notes: Calgary has a 11-10 record against Edmonton in CFL playoff games . . . Edmonton has not given up any points in the fourth quarter in its past three games . . . The most recent Battle of Alberta in the West Division final was in 2001, which Calgary won 34-16 en route to claiming the Grey Cup that year . . . In their last playoff clash, Edmonton beat Calgary 33-19 in the 2011 division semifinal.

Quarterback — Calgary's Bo Levi Mitchell and Edmonton's Mike Reilly are light on CFL playoff experience. Questions surround Reilly's mobility because of what's been reported as a broken bone in his foot.

Running back — The Eskimos talked this week about corralling Calgary running back Jon Cornish, who was dominant in the Labour Day series between the Alberta rivals. Edmonton has its own rushing weapon in John White.

Defensive end — Calgary's Shawn Lemon and Edmonton's Odell Willis were among players tied for second in the CFL in sacks with 13 apiece. Charleston Hughes is on Calgary's roster for the game, although the league's defensive player of the year in 2013 says he is still experiencing considerable pain in the foot he injured Sept. 13.

Turnovers — Calgary's giveaway-takeaway ratio this season is plus-14. Edmonton is plus-1.