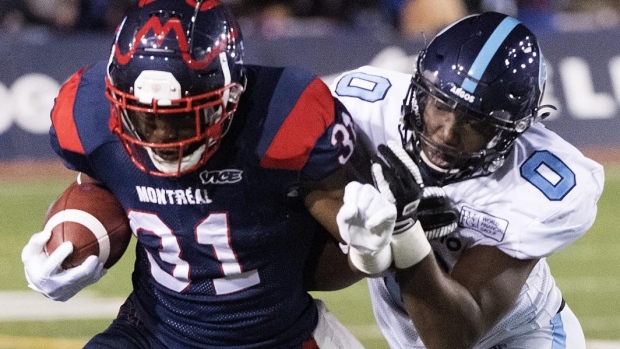 TORONTO — The Montreal Alouettes swept the performer of the week awards for Week 12 of the CFL season, with running back William Stanback taking top honours.

Stanback matched a career-high in rushing yards and scored a touchdown as the Alouettes beat the Toronto Argonauts 37-16 on Friday. The victory knotted the two clubs atop the East Division standings.

He leads the CFL in rushing with 880 yards and has 56 receiving yards this season.

Lewis leads the CFL with 815 receiving yards on 48 receptions, and his six touchdown catches are tied for second.

Hunter had two interceptions, two pass knockdowns and a tackle in the win over Toronto. It was his first career CFL game with multiple interceptions.